A Day Trip From Lima Experience 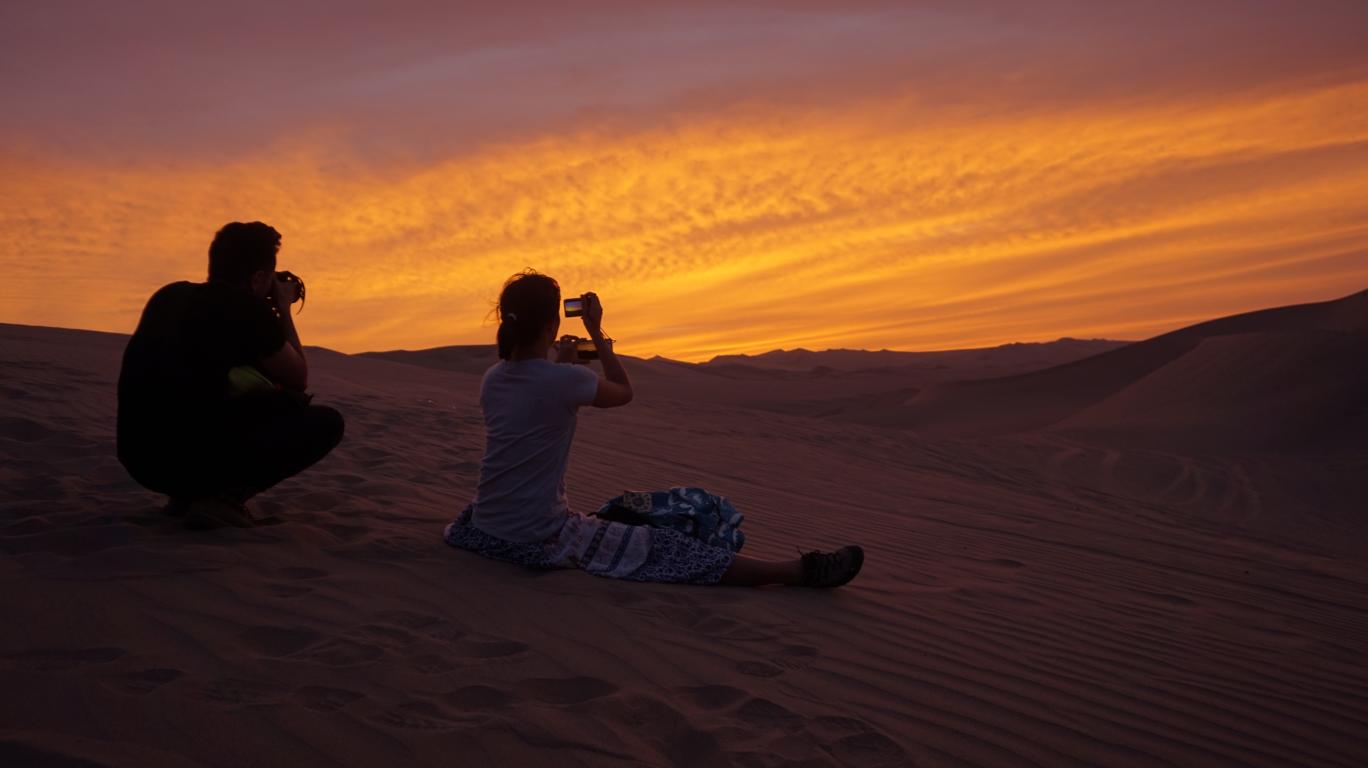 Being an avid, yet haphazard, traveller by nature, I tend to enjoy the madness of any journey: rushing to catch a flight, aimless wandering, visiting random places, sporadic bursts of adventure that take me to dodgy bars in the morning and breakfast meals late at night.

So coming to Peru, I didn’t know what to expect. In the rush of the moment, my boyfriend and I had booked our tickets to Cusco and Machu Picchu beforehand, much too early in fact. (I silently kicked myself for not having thought of getting a few extra days in Lima.)

Thanks to our poor planning skills, this meant we only had two days to spare in Lima. Oh joy. Now, if you happen to be one of those impatient travellers that NEED to see and do EVERYTHING, especially when you know you have very limited time, then I hope you can relate and empathise with the extreme frustration I felt in this situation.

What to do on our last day in Lima?

We debated doing a walking tour or a bike tour around the city, but it wasn’t quite what I wanted. We happened upon a Peru Hop flyer at the hotel we were staying at (Casa Andina) and saw that they offered day trips from Lima.

Now this sounded like an interesting option. We checked the website and saw that Peru Hop is a hop on, hop off bus service all through the south of Peru. I had no idea they had this here. So we thought we’d check it out.

We made a quick bee line for their office and after talking it up a bit with the lovely lady at the front desk, everything started to make sense. Our faces lit up, I could almost hear a heavenly angelical choir singing from above and just like that, we knew exactly what we wanted to do. 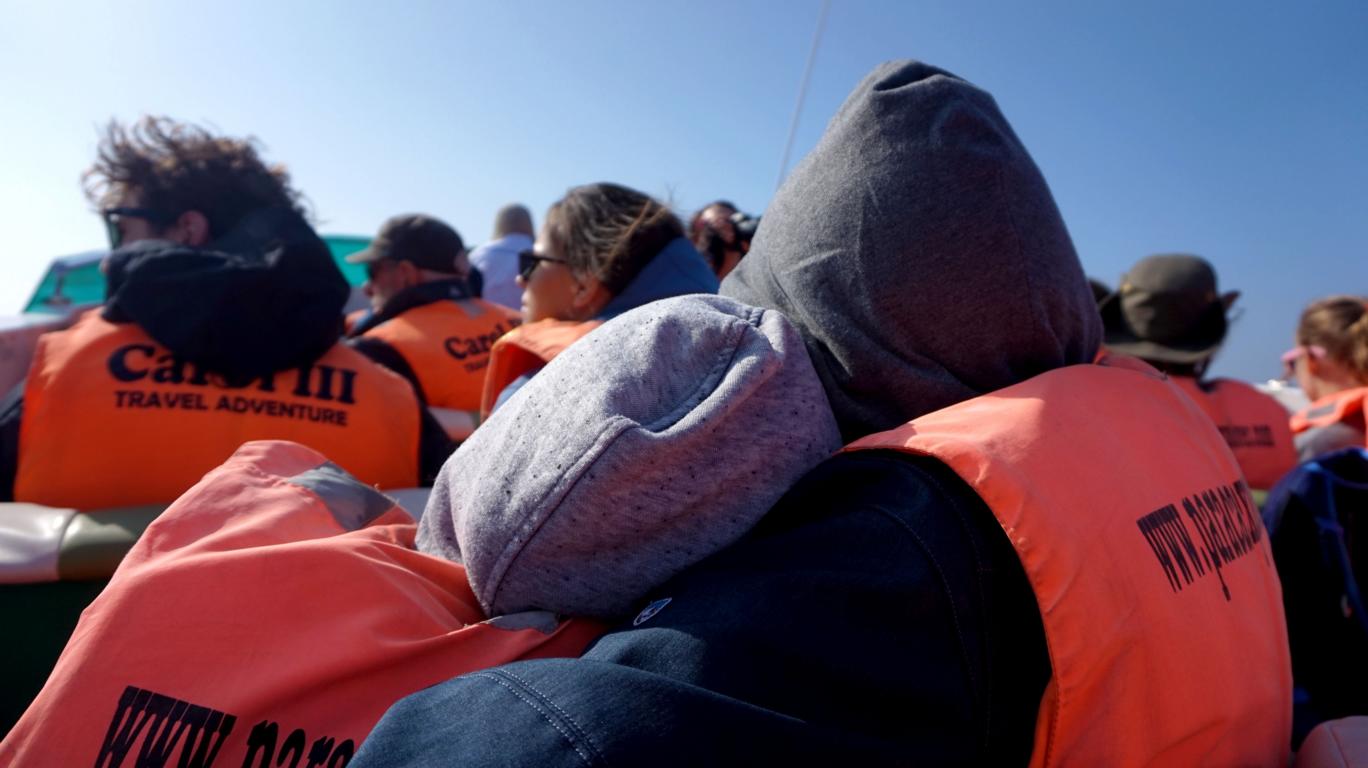 The trip we opted for was a full day tour a few hours outside of Lima, first heading to Paracas to do a 2 hour boat tour of ‘The Poor man’s Galapagos’ (yes, they really call it this!) and then on to Huacachina in the Ica province where the main activities are the dune buggys and sandboarding on some of the biggest sand dunes in South America (so I was told by the receptionist), all situated around this idyllic looking desert oasis with green water and palm trees!! This last activity was the deciding factor. There was no way I was going to miss sandboarding down massive sand dunes! Wasting no time we bought our passes, had ourselves an early dinner, and settled in for an early night. 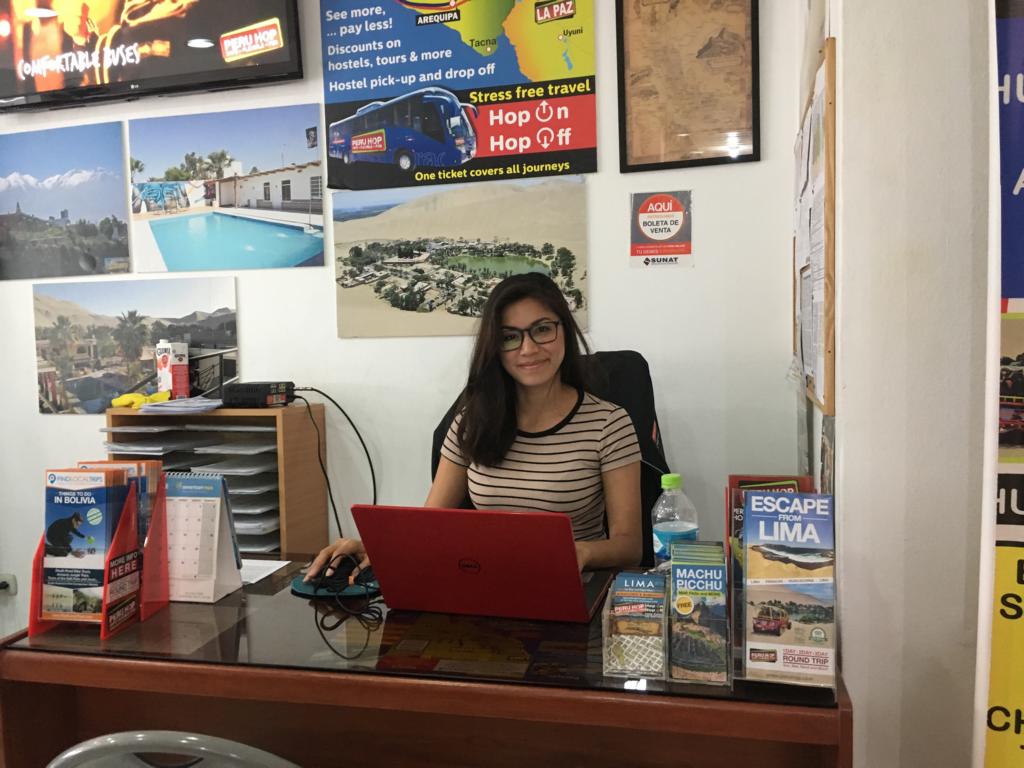 The Ballestas Islands in Paracas

Early the following morning at 5:35 am (on a Thursday) the Peru Hop bus rolled up to our hostel. Being a major stickler for time, it was a huge bonus knowing that Peru Hop was punctual. My sleepy eyes betrayed the excitement I felt as I saw the ‘Peru Hop’ sign on the bus. The bus was huge (didn’t think it would be so big!) and as I climbed into my seat I was surprised to notice how clean the bus was. As a traveller you get used to the grime of public buses, so seeing such a stark contrast was a welcoming sight.

After the bus made several stops along the way to pick up other passengers, and bet the early morning traffic, we finally managed to ease our way out of the city and onto the highway.

Our charming guide, Bibiana, introduced herself and talked a bit about Peru and told us what to expect on our trip. We settled into our comfortable, reclinable seats to catch some Z’s before reaching our first destination.

After a smooth four hour drive, we arrived to the little town of Paracas which sits directly in front of the ocean. As the bus slowed to a halt, Bibiana gave us instructions to meet by the oceanfront as we would be taking our tour to the Ballestas Islands and we were then going to all meet back at the bus at 1:00 pm.

It was the perfect day! The sun shone warmly overhead as a cool ocean breeze welcomed us as we got off the bus. We made our way to the boat tours (which was basically across the street!) and lined up for our tour.

The little fishing boats and sailboats lazily bobbing along on the surface of the water was a pretty sight. I watched as pelicans flew overhead and little oceanfront restaurants played their early morning salsa music as they readied for the day. We were definitely up bright and early! 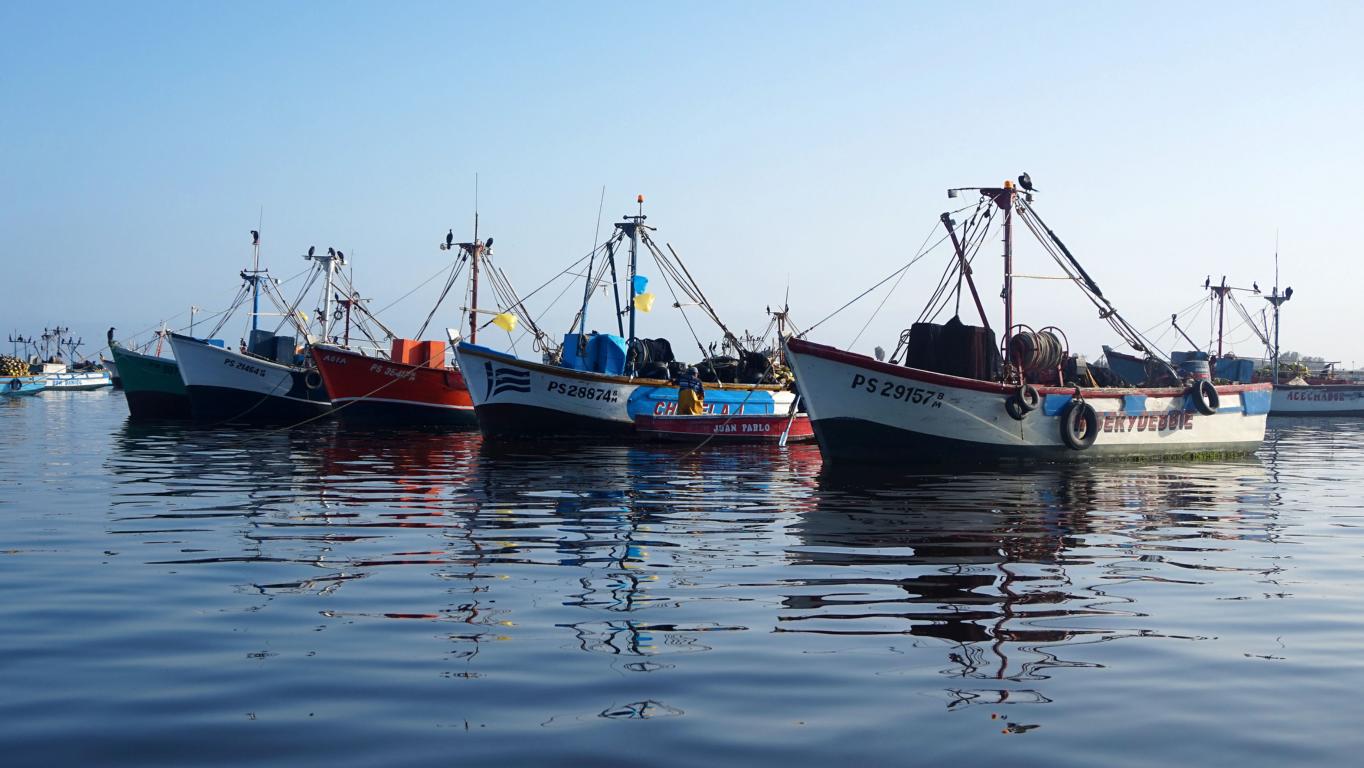 Climbing into the big speedboat, we put on our life jackets and sped out. Bibiana had mentioned that we might even see dolphins, so I found myself subconsciously scanning the ocean hoping to get a glimpse of these amazing creatures (unfortunately, we didn’t see any).

Related: Travelling by Bus in Peru

Our guide for this tour, who sounded like he had climbed out of an audiobook, gave a little bit of history about Paracas in his baritone voice. The ride was great! The ocean breeze whipped my hair about and the occasional spray of seawater made the people at the back of the boat shout and laugh aloud as their clothes got soaked! 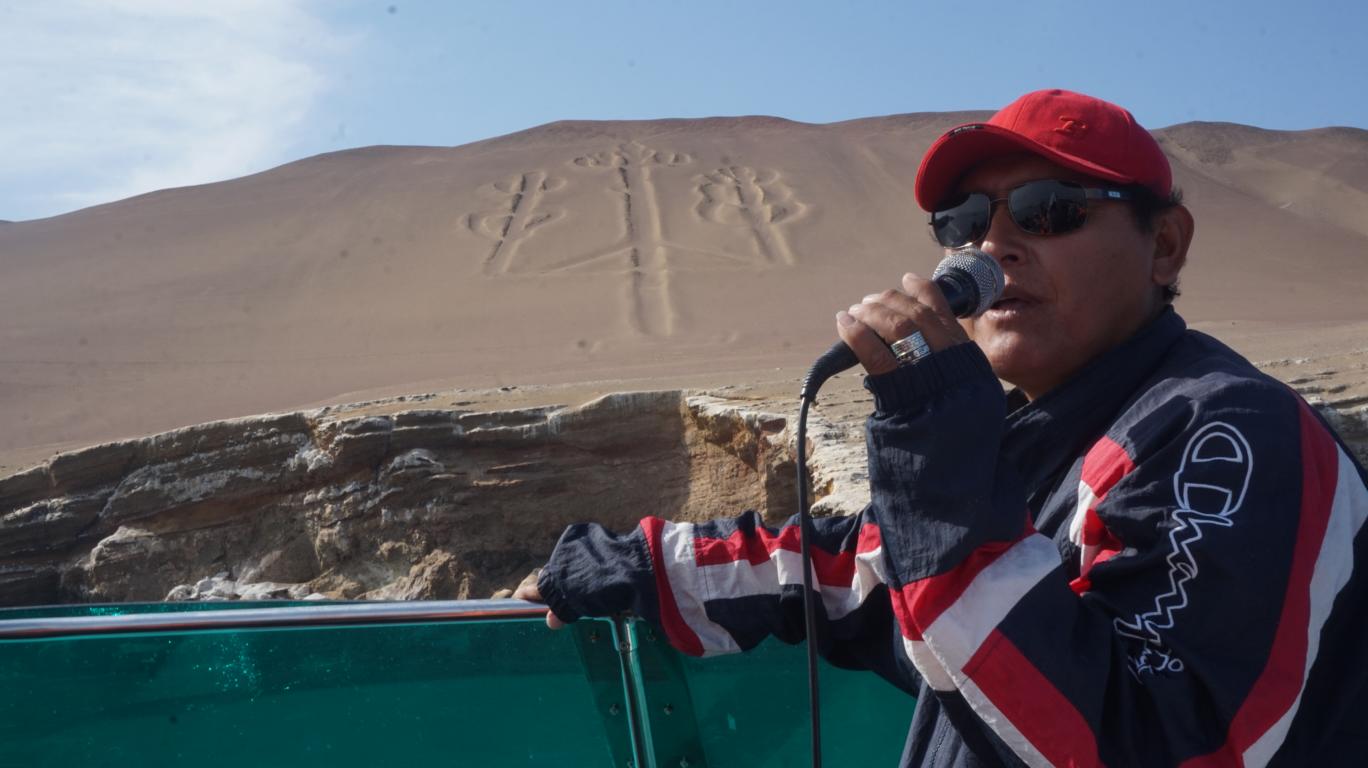 On the way to the Ballestas Islands, we passed by the Candelabro, a beautiful geoglyph on a hillside in the shape of a candlestick. The guide explained that although some liken it to Nazca lines (I thought they were similar!), it is very different and not the same at all.

After the cameras clicked away for several minutes, we continued onwards to the islands. Around 45 minutes later, we approached craggy cliffs that jutted out from the ocean like skeleton mountains.

As we got closer, we noticed hundreds of birds flying about and nesting among the cracks. A strong scent hung in the air and the guide explained that it was the smell of the birds’ excrement. Wow! It was strong. 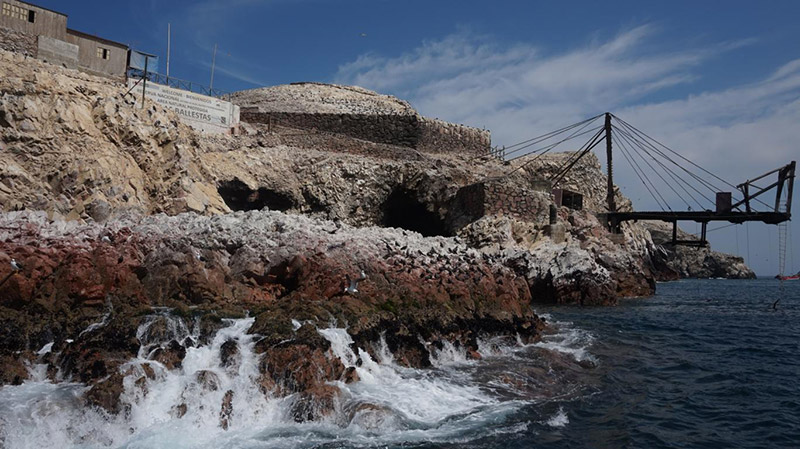 The guide explained that the birds’ excrement piles up heavily and every 8 years the town will send some men to come and collect it which they will in turn use as plant fertilizer.

As the boat steered inwards, he pointed out little penguins weaving their way through the birds and jumping down to some rocks. They were a cute sight! We then got close to some wild sea lions, lazily sun bathing. Seeing them perched precariously on the edge of the craggy rocks without a care in the world was amazing! 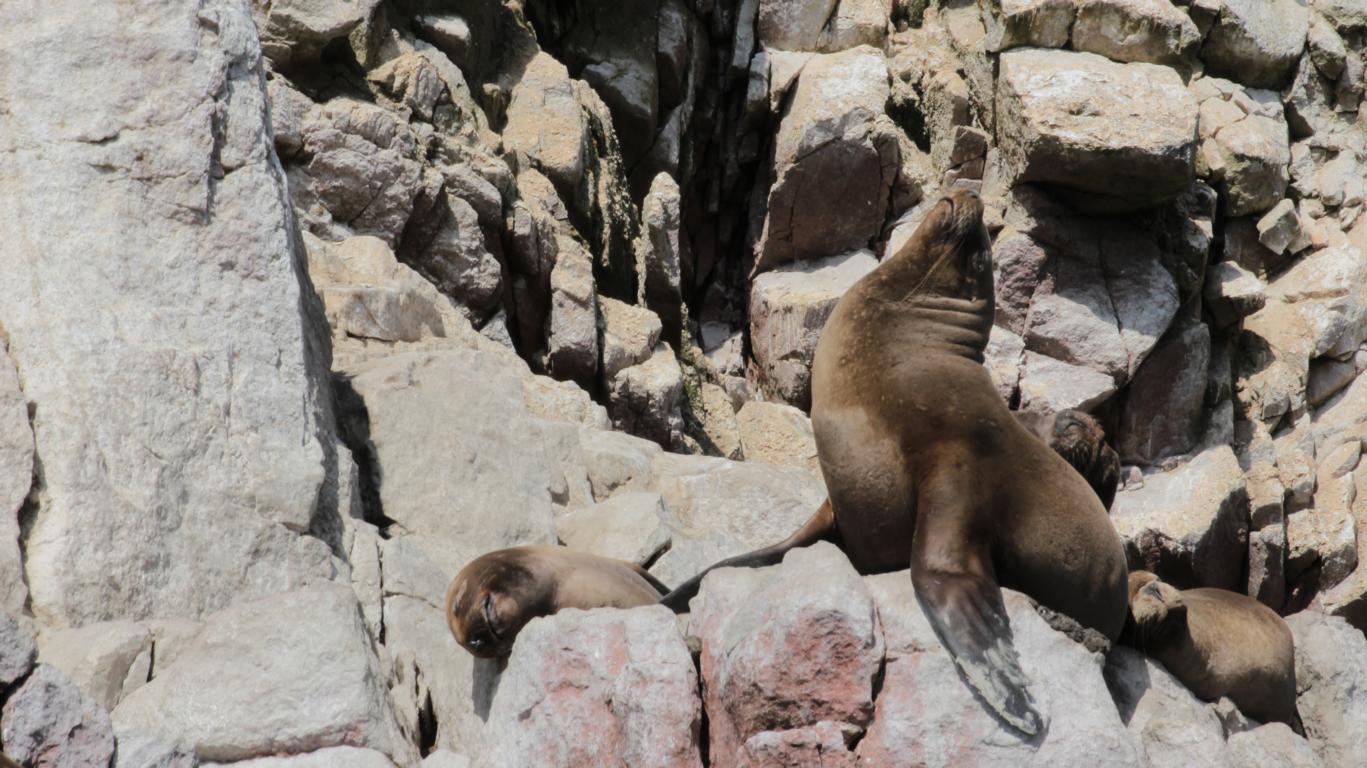 We circled the island and saw as thousands upon thousands of black birds covered an entire hilltop. I felt like I was in a scene straight out of Jurassic Park! It was surreal.

We finally turned the boat round and started back for Paracas, back to the real world. It was a scenic view as we passed islands and other sailboats.

Arriving at the dock, seeing that we had a little time to spare, we decided to sit at an outdoor restaurant and treat ourselves to a delicious ceviche, a typical Peruvian dish of raw fish cooked in lime juice. Wash that down with an ice cold beer and the day couldn’t have gotten any better!—but we were in for a great surprise!!

We left Paracas, eager to get to our next destination—Huacachina! Sandboarding! Dune Buggys! This was what I had been looking forward to all day.

We arrived to Huacachina at 2:20 pm and the first thing I noticed was the dust and sand. So much sand! We were in the middle of a desert. As we drove up to Huacachina the sand dunes loomed high around us. 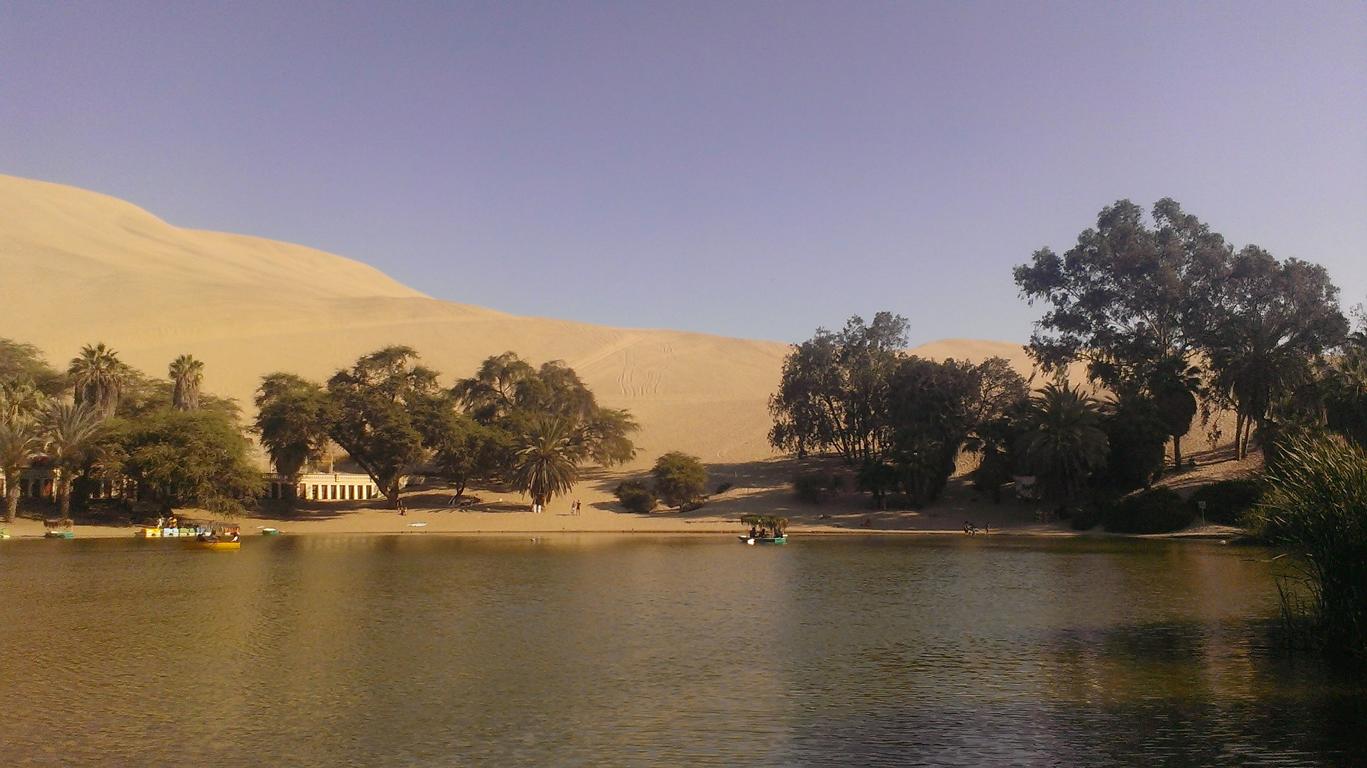 Upon arrival, the guide gave us some free time to explore the place before we started the tour. My boyfriend and I walked about the small little town and right smack in the center was the famed oasis, the life of this little place.

Returning to the hotel for the tour, we saw the dune buggies parked outside and I knew the best part was coming! Strapping ourselves in, we drove out and headed towards the dunes.

I felt a tingle of excitement for what was to come. The drivers hit the gas, and we flew! It was a rollercoaster ride on the sand. We climbed, then dropped hard down massive sand dunes and drove around these dune craters at top speed at a 45 degree angle. It was absolutely insane and everything I had imagined it to be! 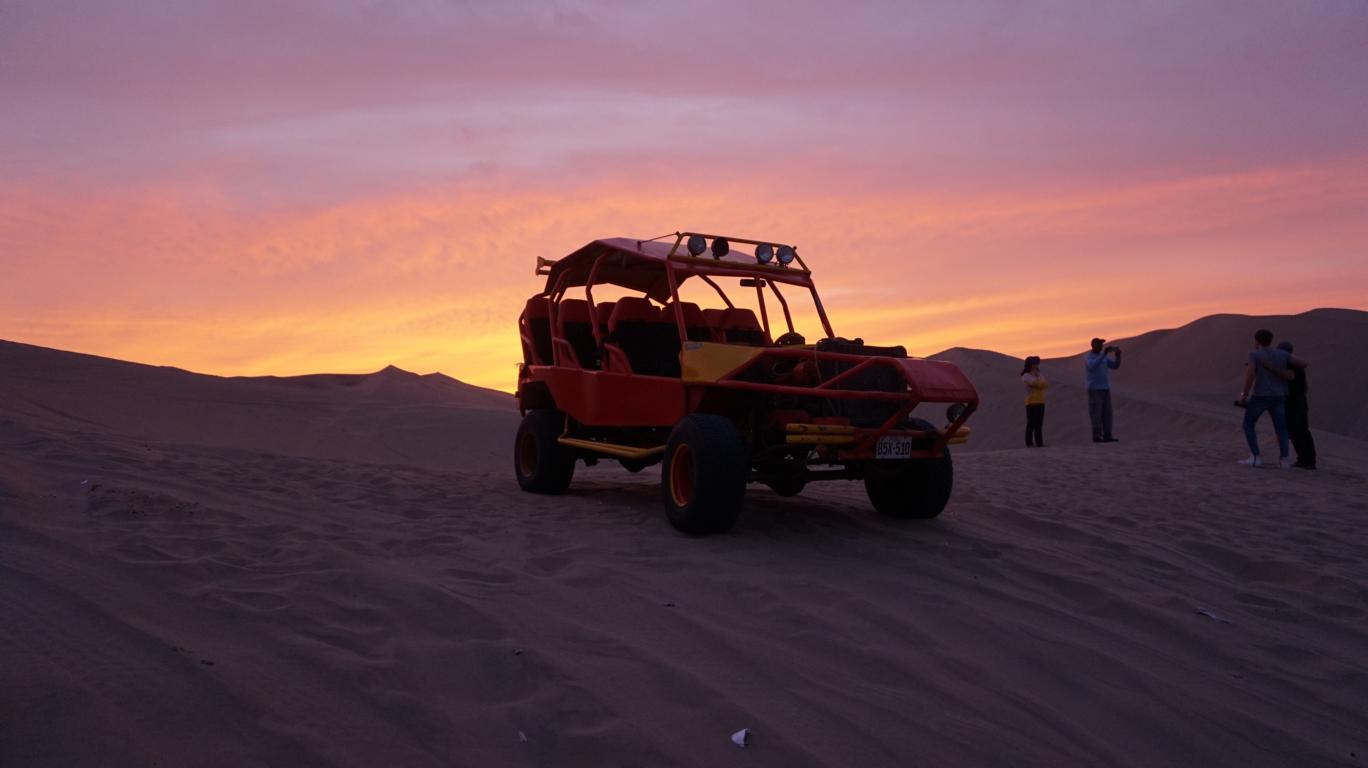 After going a few rounds with the dune buggies, we did some sandboarding. We would drive to the very top of the sand dunes and the guide gave us all a board. The daring did it standing up, surf style. I went belly first on my board and as I glided, I happily ate sand at the bottom.  The child in me emerged and it was the most fun I had had in a long time! 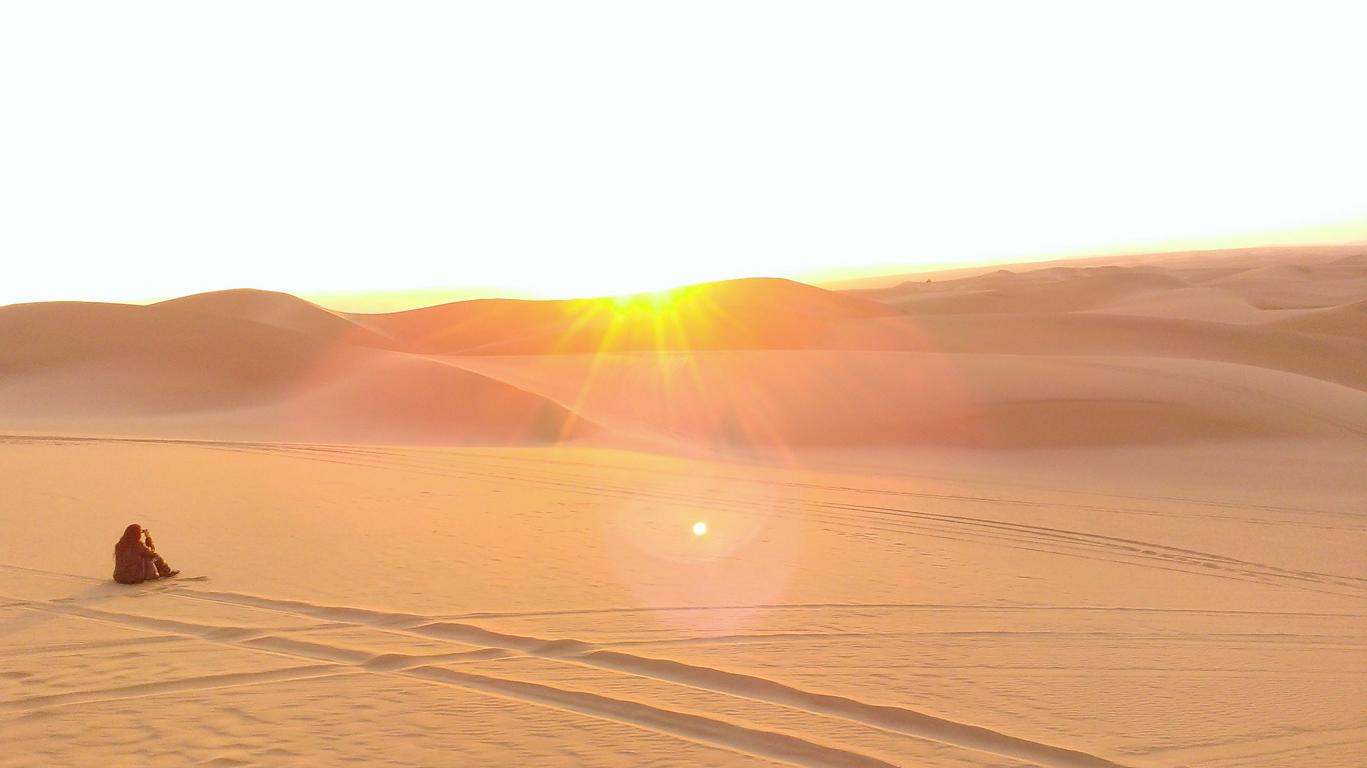 After what seemed like hours, and many trips up and down the sand dunes, we took some time to admire the view as the sun set. And boy, what a view! The sand dunes went on as far as the eye could see in rolling hills, and as the orange rays of the sun touched the hills, it created a scintillating effect. I breathed in the air and took a moment to fully thank the universe for bringing me to this very spot.

Feeling tired, but happy I settled in the bus for the long ride back home. Yes, today was an excellent day. Even the movie Bibiana played on the bus was on point. (Who would have thought that nostalgia would kick in as one of my favorite childhood movies Mrs. Doubtfire, would be playing on the bus?) 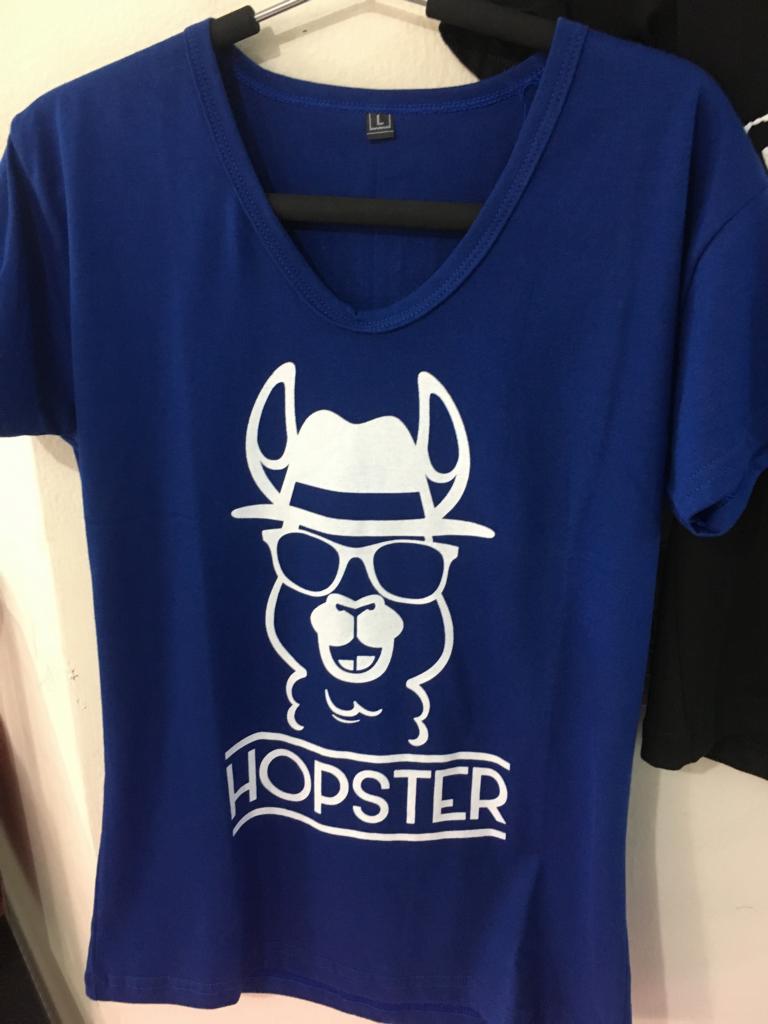 Bibiana said we would get a little prize if we stopped by the office the following day. The next morning we came back to the office and we were rewarded with a Peru Hop T-shirt. A great souvenir to remind me of one of the best days I ever had!

Peru Hop exceeded my expectations by giving me a day to remember. From pick up’s and drop off’s to a charismatic guide, from punctuality to reliability, this is definitely a trip I recommend to any traveller visiting Peru.

For an impromptu traveller such as myself, this way of traveling certainly gave me the liberty to fully enjoy the reckless beauty and fun of the trip in a wonderfully organized and safe way.

Time for a repeat.

Author bio: Nicola King is an Australian journalist that is travelling the world in search of good food, nice people and the best stories.

BOOK THIS EXACT TOUR FROM LIMA

If we are outside operating hours, we will call you as soon as we open again
Important: Our team will contact you via phone .
Note that phones operate from 9am to 7pm Peruvian time (Peruvian time now is: 6:58 pm)