Sacsayhuaman: All You Need To Know

Sacsayhuaman is a site surrounded by mystery. Some believe it to be a fortress, and some a temple. Whichever it was, it is unmissable on your trip to Cusco.

One of the most astonishing archeological complexes ever discovered, Sacsayhuaman has become an all but compulsory destination in Peru due to its beauty and grandeur. People from all over the world gather to revel in the history of the magnificent structure. Our all you need to know guide will show you why Sacsayhuaman is a must-see on your list of destinations for 2021. Make sure that you don’t miss out!

The archeological complex is located 2 km north of the main square of the city of Cusco and rests 3700 meters above sea level (an extra 300 meters to Cusco centrals 3,399 meters). It’s the highest part of the city of Cusco and covers an area of more than 3 thousands hectares, on a hill surrounded by huge mountains. The site has beautiful landscapes and is home to a great diversity of plants and animals, as llamas and hawks can also be found here in large numbers.

What does Sacsayhuaman mean

Sacsayhuaman (also known as Saksaywaman or Saqsawaman) is a Quechua word that can be translated as: “Saqsay”- “Satisfy”, and “Huaman”-“Hawk”, meaning “the place where the hawk is satisfied”. It is believed that the complex was given this name due to the presence of the hawks, and legends tell of the Inca who fed a hawk that landed on his shoulders. Current theories argue that the complex served as a fortress as well as a ceremonial center but the truth is that no one is really sure exactly what Sacsayhuaman was before the Spanish invaded, at which point it was used as a fortress.

There is another theory about the name of the structure. This theory claims that all of Cusco was laid out to form a puma shape when seen from above, this is plausible as the puma was a very sacred animal to the Inca people. If this is the case, Sacsayhuaman was in the place of the animals head. One of the translations of the word Sacsayhuaman is Puma, and that this animal is the one who watch and take care of everything. 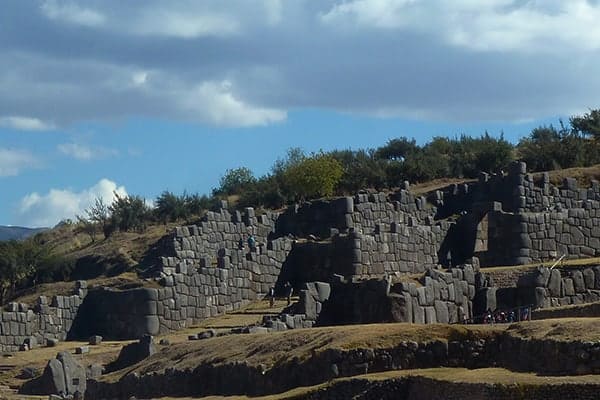 How to get to Sacsayhuaman

If you would like to book a tour to see Sacsayhuaman then check out Find Local Trips to find the perfect tour for you. We recommend using a tour, so that you can fully understand and appreciate the different areas of the ruins. However, if you decide to go alone then you can get a taxi up- all drivers in Cusco will know the direction, or you can go on foot. If you decide to go on foot, follow these directions (starting from Plaza de Armas).

Go up Suecia street, take Huaynapata street, then follow Resbalosa street. Turn right after San Cristobal church and follow the highway. Finally, you will join the old Inca road to Sacsayhuaman. Keep in mind that the climb is very steep and takes at 30 – 40 minutes, so don’t forget to bring your bottle of water with you, and ensure that your body is acclimatized to the altitude. At the top of this hill is where the ruin rests.

Sacsayhuaman was the most important military base of the Inca Empire, and has been compared in greatness with the Roman Colosseum. The whole structure is a hugely impressive work of engineering and is considered one of the Inca structures that will remain in Peru forever.

Even today, Sacsayhuaman is still used, now mostly for reenactments of Inca-inspired ceremonies. It is possible to buy tickets to see these events which immitate and celebrate Inca tradition. 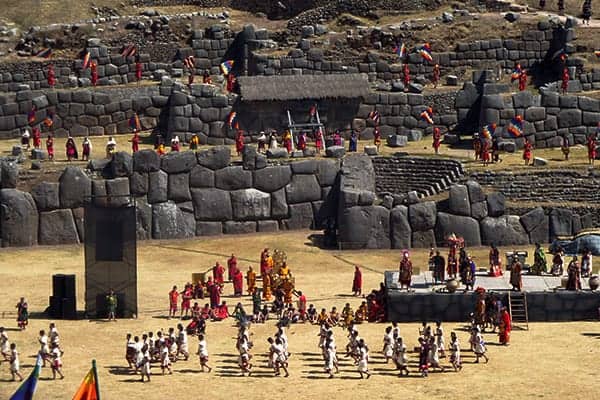 How was Sacsayhuaman built?

Sacsayhuaman was constructed during the reign of the Inca Pachacuti and his successors. It’s massive, well-built walls remain today as a testimony not only to Inca power, but also the skills of Inca architects and their progressive buildings and knowledge of stonemasonry.

The first structure of Sacsayhuaman was made using only mud and clay as was typical in Inca buildings, and following Inca leaders gradually replaced the clay bricks with the enormous stones that you see today. In fact, many of these stones are over 100 tones, and more than 4 meters in height.

The fortress was the largest of many structures built by the Incas (between the 14th and 15th century). Built on a platform of rock high above the capital, it took over 50 years and 20,000 men to build it. The men who built it were signed up using the ‘mita’ which was a form of community service, compulsory for every citizen of the empire. It required two years of dedicated service between the ages of 18 and 20.

It may not surprise you to hear that the Inca were incredibly skilled at stonework. It was a part of their normal culture to quarry and shape enormous rocks, and to move them with a system of ropes, logs and levers. By using smaller stones and sand to finish the worked stone, the look that you see is achieved.

How Was it Designed and What was the Function?

The fortress has three different terraces which lay one behind the other. The walls reach a height of 18 meters and stretch over 540 meters. Each wall has up to 40 segments which allowed defenders to catch attackers in a crossfire. Because of the many different kinds of architecture, the function of Sacsayhuaman is still up for debate by many historians.

Other scholars debate that it may have been a sanctuary, as the complex included many temples, most notably the one dedicated to the Inca Sun god Inti. There is an area of stepped terracing cut into the side of the Rodadero Hill, which is thought to have been a religious shrine, perhaps dedicated to the Pachamama (the mother earth).

There is even some evidence that shows that this archeological site was also used as a storage depot, where the Inca probably kept arms, armours, foodstuffs, valuable textiles, ceramics, metal tools and precious metals.

What is known for certain is that Sacsayhuaman was used as a fortress during the Spanish conquest. The Spanish, led by Francisco Pizarro, conquered Cusco after killing Inca Atahualpa. It was then that Pizarro sent his army to attack Sacsayhuaman; using his horses to get close and ladders to climb the walls. The strategy was successful and the Spanish took over the fortress.

After the Inca Empire was defeated, Sacsayhuaman was partially dismantled by the Spanish, as they wanted to destroy the idea of Inca rebellions. The remainder of the structure was covered in earth, leaving no visible remains of the magnificent construction. That is, until 1934, when it was rediscovered during excavations.

Nowadays, the complex is very important for the residents, as it is the place where the annual Inca festival takes place: the Inti Raymi or “the party of the Sun”, which is held every 24th of June at the winter solstice. In the time of the Inca, this was a ceremony where a sacrifice was offered to the Sun god “Inti”.

In modern times, local people represent this ceremony with colorful costumes, festive music and local food. It is possible to attend one of these events, but a ticket must be purchased beforehand; and the ceremony no longer uses a sacrifice, merely a representation. 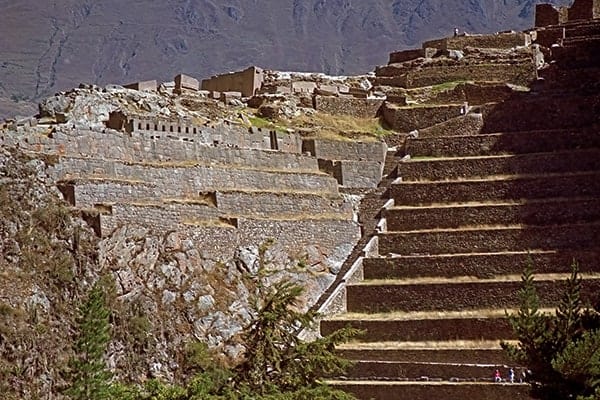 This was one of the most important places for the Incas as it was the center of celebration ceremonies, rituals and sacrifices. Thousands of people gathered here to see some of the most beautiful and significant rituals of the entire empire. Here, the battle of Sacsayhuaman took place, and many native people died defending the empire. Let yourself be captivated by the history and mystery that fills each wall of the complex.

The Towers of Sacsayhuaman

These are called Muyuccmarca, Paucarmarca, Sallaqmarca, and are located on the top of the walls. There was plenty of water here thanks to aqueducts that can still be seen today.

It is said that the Inca Titu Cusi Huallpa (also known as Cahuide) jumped from the highest part of the Muyucmarca tower to avoid becoming a Spanish prisoner during the Inca resistance of 1536.

The remains of the Paucarmarca tower are located at the east of the complex. It is believed that this tower was dedicated to the stars.

In Quechua “Sallaq” means rough, rocky and “Marca” means population. Currently, just the foundations of the Sallaqmarca tower can be seen as the building was destroyed in the early days of the colony.

Located at the top of the hills, these beautiful rooms overlook the city and squares. The rooms are characteristically long and narrow, interconnected by a series of trapezoidal doors, which are typical of the architectural style of the Inca. 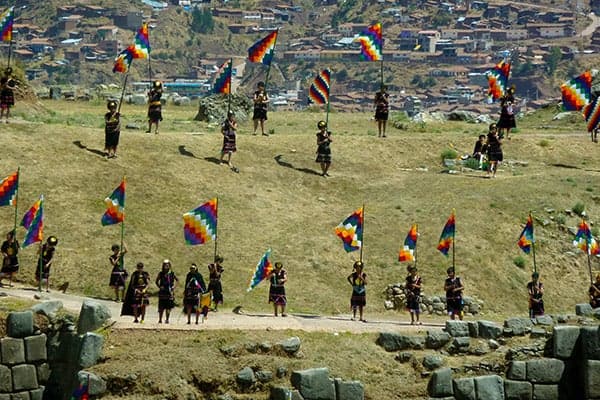 For the Incas this meant “where the monkey climbs”, and it is a succession of seats carved into the rock, boasting a deep aesthetic beauty.

The chincanas are the tunnels and underground caves of Sacsayhuaman. There are 2, the smallest of which is short in length and has become very popular for travelers to visit. The larger one is further north, under a large limestone rock, and so is not easily accessible. Theses amazing tunnels are the result of the rock erosion from groundwater in the caves. Don’t forget to bring your camera to snap some unforgettable shots of this ancient place.

How Was it Built?

3 platforms feature toothlike inlets and are made of limestone and are assembled to form this incredible structure. Because of the sheer size of Sacsayhuaman, the Spanish attributed the building of it to demons, and even today there are people who say that it was aliens who are responsible for it. However we do know that it was pure and simple Inca-man-power that accomplished this impressive feat.

Weather: Sacsayhuaman has weather that is almost identical to that in Cusco. The annual average temperature is 12°C and there are two seasons during the year. The rainy season (from November to March) and the dry season (from April to October). Temperatures typically stay the same through the different seasons, although you can expect a lot more wet weather during the rainy season.

Opening Times: The entry times to Sacsayhuaman are Monday-Sunday 7:00 am to 6:00 pm.

Prices: Entry included in Tourist Ticket that costs around S/. 70 to S/. 130. You must buy a tourist ticket for most of the attractions in Cusco.

Don’t miss out the opportunity to immerse yourself in this ancient world of Sacsayhuaman. Give yourself the opportunity to discover why this archeological complex is drawing more and more people from all around the world. You will be charmed, not just for the astonishing building work, but also for the lovely local animals you can find here, like llamas and hawks. Put Sacsayhuaman at the top of your list of destinations for 2021.

If we are outside operating hours, we will call you as soon as we open again
Important: Our team will contact you via phone .
Note that phones operate from 9am to 7pm Peruvian time (Peruvian time now is: 03:02 pm)