Arequipa, or “The White City” as it is sometimes called, is Peru’s second-largest city by population and one of the most frequently visited by tourists. Every year, hundreds of thousands of visitors come to this volcano-surrounded southern city to appreciate its beautiful colonial architecture, take in the local culture, and to visit nearby sites such as Colca Canyon.

Arequipeños are immensely proud of their local culture, a culture so strong and unique that Peruvians often joke that a different passport is required to enter the region. It could be my stomach talking, but I believe that the best way to experience a new culture is by tasting the local food and drink. I’m also a big fan of spicy foods, and Arequipa is well-known for its picanterías (a special type of local establishment serving spicy foods), though there are plenty of things for those with milder taste buds as well. With that said, here are a few of the best local specialties that I tasted on my trip to Arequipa last year:

What To Eat in Arequipa:

Similar to another Peruvian dish called papa a la huancaina, ocopa is an appetizer consisting of potato topped with a special spicy sauce and served cold. The sauce is an interesting blend of chili pepper, garlic, onion, huacatay (a type of South American herb), peanuts, milk, cheese and crackers. Ocopa is one of the signature dishes of Arequipa and is a great small dish to start off a meal. 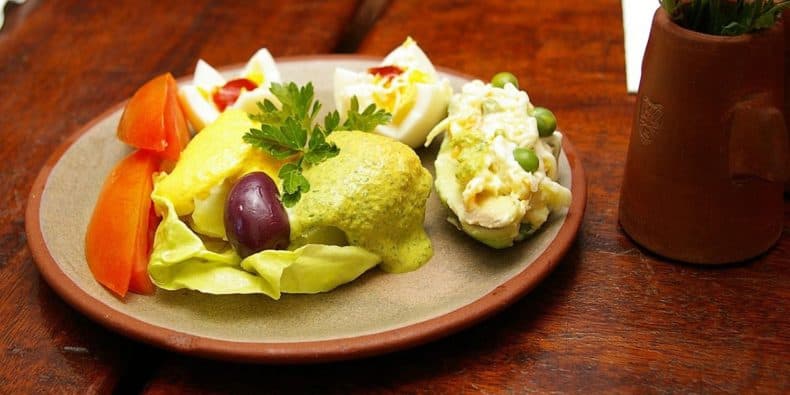 Think of this like Arequipa’s version of a potato salad. The word escribano means a “court clerk” and legend has it that this dish was inspired by Arequipa’s lawyers and clerks who would, being engrossed in their conversations about work, accidentally mix the potatoes, tomatoes and rocoto peppers typically served as hors d’oeuvres at the time. 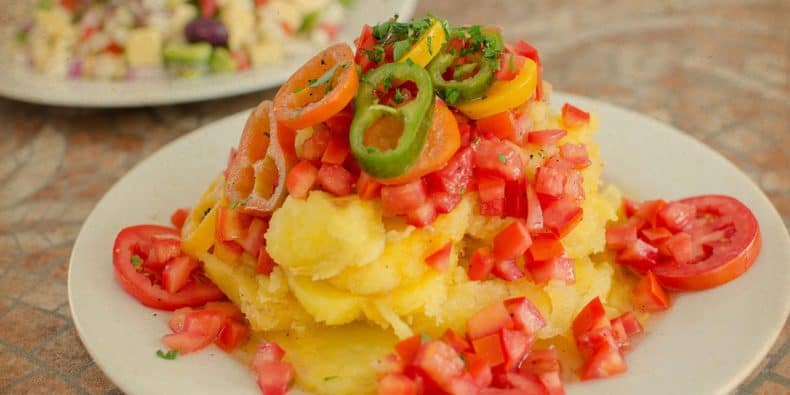 Another simple vegetable plate, this super-healthy salad is a popular entrée for dinners in Arequipa. It consists of slices of boiled potato mixed with cheese, herbs and fresh vegetables such as tomato, olive, rocoto pepper, and onion.

One of Arequipa’s most iconic dishes is rocoto relleno, a type of stuffed pepper. Unlike many stuffed pepper recipes that use sweet peppers, this one uses the rocoto, a red pepper which is more than ten times spicier than jalapeño. The peppers are cooked in water and vinegar to remove as much spiciness as possible, but they definitely retain a bit of their zing. The most common stuffing is a mixture of meat, butter, cream, and pecans. Rocoto Relleno is also usually topped with a slice of melted cheese.

Despite the city’s location further inland, the region of Arequipa actually borders the Pacific Ocean, so fresh seafood is brought up from the coast every day. One dish taking advantage of this is chupe de camarones. “Chupe” is a Quechua word meaning soup, and this chupe contains a hearty mixture of shrimp, garlic, milk, corn, and several other vegetables. This dish is popular all over coastal Peru, but its origin lies in Arequipa. 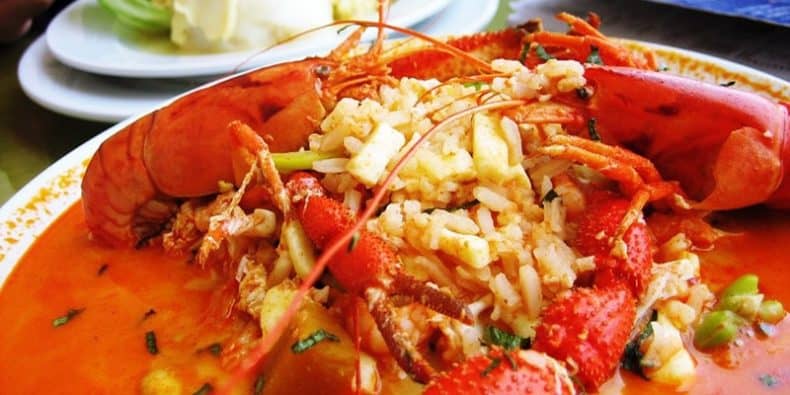 An adobo usually refers to a dish where raw meat (in this case pork loin) is marinated in vinegar and spices. Adobo arequipeño takes this concept and adds chicha, an ancient Andean drink made of maize, to the recipe. Also containing cumin, garlic and other various spices, this is a rich, flavorful dish well-known across Peru.

This thick stew consists of beef breast mixed with cumin, mint and other herbs and spices. Its texture comes from potato which is crumbled and added into the mixture. It is normally served with rice. 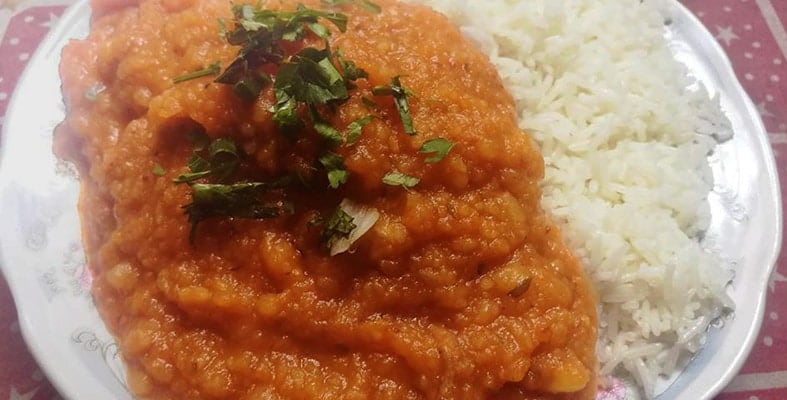 What to Drink in Arequipa:

This is the local version of chicha, the maize-based drink ubiquitous throughout Peru. Chicha de guiñapo differs from the more common chicha de jora and chicha morada because it uses a special type of maize that typically grows in the Arequipa region. It is fermented for a couple days, giving it a low alcohol content of around 2-3%. The flavor is light and sweet, and it pairs well with Arequipa’s spicy food.

Yes, Arequipa even has its own soda to compete with the Inca Kola that is popular throughout Peru. Kola Escocesa, which means “Scotch Cola,” has been produced in the town of Yura near Arequipa since the 1950s. It has a fruity flavor and is slightly less sweet than its more well-known competitor Inca Kola. 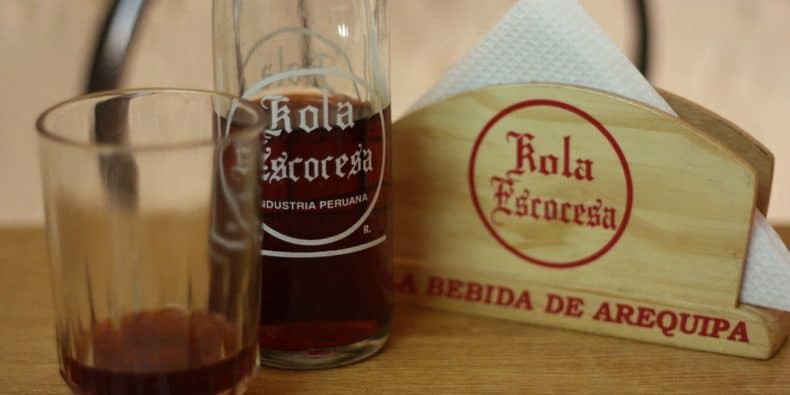 Pisco is drunk all across Peru, but many people don’t realize that there are multiple types of this popular grape brandy. Pisco acholado is the type which is made in the Arequipa region. This lesser-known type uses a mixture of accepted grape varietals, as opposed to a single varietal like traditional pisco. This gives pisco acholado a more complex and interesting range of flavors compared to the coastal varieties. It is normally taken the same way as any other type of pisco: in a pisco sour, chilcano, etc. Here are some more Pisco Cocktails.

Anis Najar is a form of anisette (an anise-flavored liqueur) that is made in Arequipa. It has a dry flavor and an especially high alcohol content for a liqueur. It’s normally drunk as a digestivo, or after-meal drink. 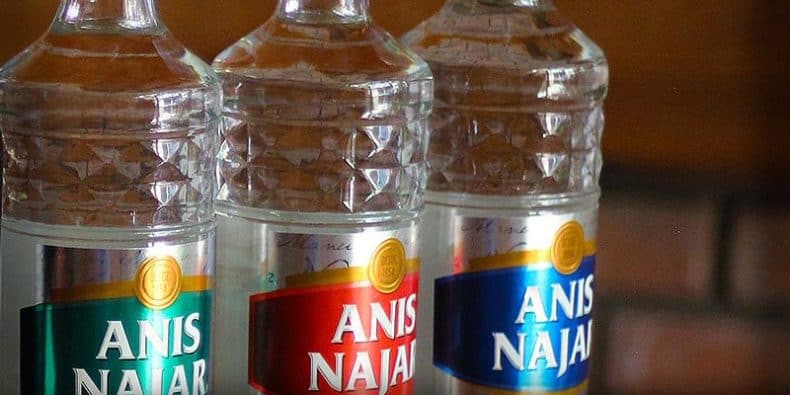 Queso helado, whose name means “iced cheese,” is a type of artisanal ice cream that was invented in Arequipa. Despite its name, it contains no cheese–its texture actually usually comes from coconut mixed with condensed milk and egg. It is flavored with vanilla and cinnamon. 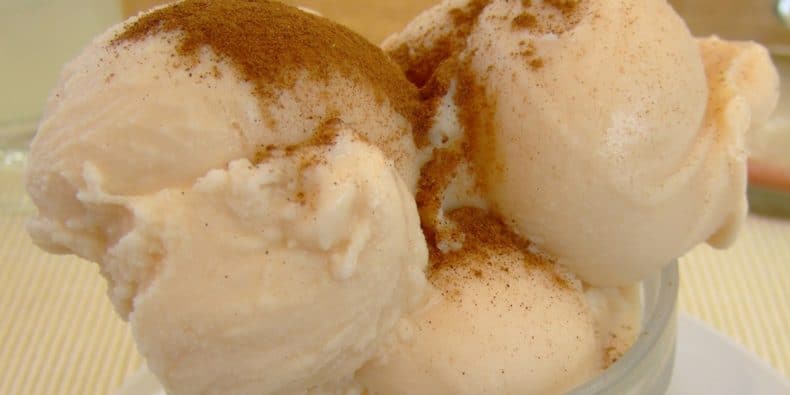 This is Arequipa’s interpretation of mazamorra, a gelatin-like dessert which is popular all across Peru. This version uses the seeds of the airampo cactus along with dried and fresh fruits. The mixture is then thickened with manioc flour. These unique local ingredients make for an interesting version of this treat, which is more commonly made using purple maize. Mazamorra de airampo is usually served hot and sprinkled with a little cinnamon.

We hope that the above list has given you somewhere to start when you visit Arequipa. As you can see, there are loads of amazing things to taste in Peru’s second city (but if you didn’t, we recommend to check out Arequipa official website). If you’re planning a trip in the future, we suggest that you consider booking a ticket with Peru Hop. Since it’s a hop on hop off style service, you can stay as long as you want in one location and just simply catch the next bus when you’re ready to move on–definitely the most flexible way to travel in Peru.

If you want to keep on planning your trip to Arequipa then check out this page on tours of the famous Colca Canyon, found in Arequipa.

BOOK A TOUR IN AREQUIPA NOW

To book a Tour in Arequipa we strongly recommend that you use FindLocalTrips.com a search and comparison website for tours across all of South America.

Complete this form to receive help via phone.