Overshadowed by the Incas in popular knowledge, the Chachapoyas culture ruled over a large area of northern Peru which is now the Amazonas region.

Overshadowed by the Incas in popular knowledge, the Chachapoya culture ruled over a large area of what is now the Amazonas region of northern Peru. The name Chachapoya was likely given to the group by their Inca conquerors, derived from a Quechua phrase meaning “cloud forest.”

True to their name, the Chachapoyas made their home among the cloud-covered tropical rainforests lining the eastern slopes of the Andes mountains. Since their civilization had already been subjugated by the Incas before the Spanish conquest, the only written information about the original Chachapoya culture comes to us second or third-hand, leaving the group somewhat shrouded in mystery.

What we do know is that the Chachapoyas were fierce warriors who left behind a number of incredible architectural and cultural wonders that are just as interesting as more famous sites like Machu Picchu and the Sacred Valley of the Incas. 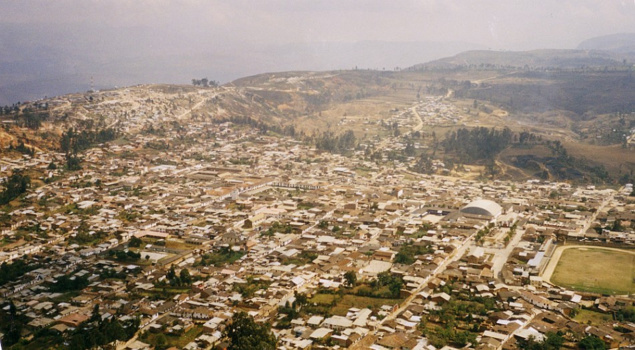 Sometime in the mid-sixteenth century, the Spanish established the city of San Juan de la Frontera de Los Chachapoyas within the former realm of this now-lost culture (cities with this name had been founded and abandoned several times for various reasons but it’s believed that the final location was established in 1545).

Nowadays, Chachapoyas is a modern Peruvian town of around 20,000 people and the capital of the Amazonas region. This town is the best place to depart for tours and excursions exploring the land of these enigmatic cloud warriors. Since this region is still relatively isolated from the rest of Peru, making a detour to Chachapoyas is a great way to step off the typical “gringo trail” and see something a little different than the typical sights.

Aside from its wonderful natural and archaeological attractions, it is also an exceptionally pleasant place to visit, featuring moderately-warm temperatures without the excessive levels of rainfall of cities further into the jungle. Anyone who makes Chachapoyas a stop on their trip to Peru will be well-rewarded for sure!

How to get to Chachapoyas

Chachapoyas has its own airport and there are several flights arriving there each day from Lima. For ground transport, it’s possible to bus all the way from Lima or to arrive from nearby northern cities such as Chiclayo and Cajamarca. Unfortunately, our preferred bussing option Peru Hop is not yet serving this part of the country, but there are a number of other reputable options available such as CIVA and Moviltours.

What to do in Chachapoyas

There are tons of things to do in the area around Chachapoyas, but here are a few of the most important:

This is the most important and best-known archaeological site of the Chachapoyas culture. Located at an elevation of 3000 meters and surrounded by dreamlike cloud forest, the citadel of Kuelap is definitely the top attraction of the region. The site consists of over 550 structures in total, and it’s theorized that the city may have had a population of as many as 3,500 people.

Many believe that Kuelap was constructed specifically for its defensibility, as Its elevated location and stone walls made it the perfect location to repel invaders. The site also contains lots of culturally significant items and art. The zig-zag friezes lining its walls are iconic, and many of the stones also contain reliefs with representational or geometric symbols and designs.

A number of burials have also been found within the walls. As one of the largest stone ruins in the Americas, Kuelap is one of the most interesting and enigmatic sites in Peru and definitely worth a visit. The best way to get there is by booking a tour departing from the city of Chachapoyas.

The Gocta Waterfall is an amazing 771 meter high waterfall which has been variously ranked as the 3rd, 5th or 16th tallest waterfall in the world depending on how it’s measured. Gocta has two drops and is situated within the beautiful cloud forest environment that is typical of the area. The truly incredible thing about this waterfall is that it was known only to locals until 2002 when it was “discovered” by the German explorer Stefan Ziemendorff.

There had been a local legend of a beautiful blond mermaid protecting the waters, and this has been cited as one reason for outsiders remaining ignorant of the site for so long. Since its existence was made known to the wider public, the Peruvian government has put in effort to develop the Gocta Waterfall as a tourist attraction, though it’s still definitely a bit off the beaten track. The best way to get there is by booking a tour departing from the city of Chachapoyas. 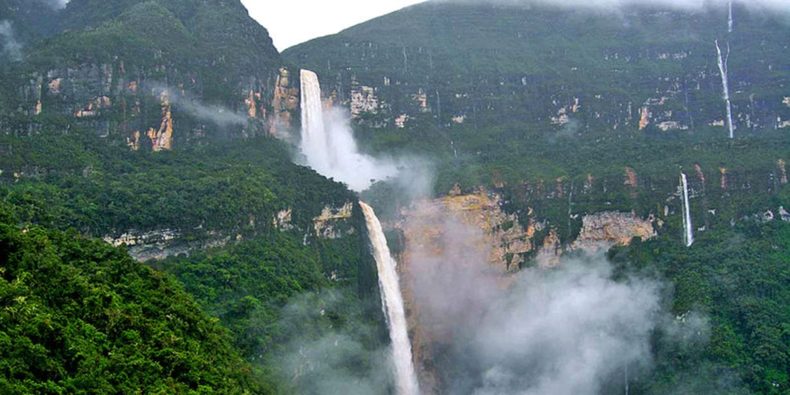 Karajia is an archaeological site located in the Utcubamba valley which contains a series of eight cliffside mummies from the Chachapoyas culture. The mummies are housed within sarcophagi made of clay, straw and gravel spread over a wooden coffin. They have been sculpted and painted to resemble human figures, which local residents refer to as the “ancient wise men.”

This type of sarcophagus, called a purunmachu, can be found at many sites across the region, but the ones found at Karajia are the most important due to their extremely inaccessible cliffside location which has kept them untouched by grave robbers. Visitors to Karajia also often visit the nearby caverns of Quiocta. This series of six connected caverns lead deep inside the mountains to reveal breathtaking stalactites and stalagmites. There are also a number of human bones still found at the site.

It’s unknown why these bones have been placed inside the cave, so for now they remain a mystery just like many other things in this region. The best way to see Karajia and Quiocta is by booking a tour departing from the city of Chachapoyas. 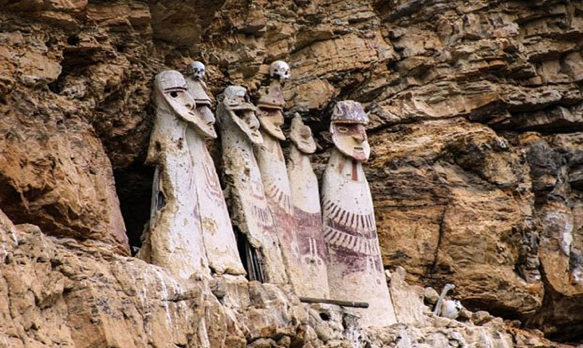 As you can see, this mysterious land of the cloud warriors is full of interesting sites and attractions. It may not be as well-known as some other regions of Peru, but it certainly has plenty to offer tourists, especially those who would like to get a little off the beaten track. We hope you’ll consider a stop in Chachapoyas and the surrounding region on your trip to Peru!