Inti Raymi history dates back to the start of Tawantinsuyu, the Quechua term for the Inca Empire. Inti Raymi was the most important Incan festival, learn all about it here!

Inti Raymi in the time of the Incas was a religious ceremony, nowadays is a theatrical representation. However, it still gives a sense of identity to the people of Cusco, bringing back moral values and memories that are essential to the city and, most importantly: it represents a cultural heritage that’s still alive in every Cusqueñan heart.

Today, it’s the second largest festival in South America, still celebrated in indigenous cultures throughout the andes. Actors are chosen over the year and their costumes are carefully prepared with golden and silver ornaments denoting rank among the nobles and high priests. Celebrations all around involve music and dances.

What is the Inti Raymi Festival Really About?

The Inti Raymi was a religious ceremony of the Inca Empire in honor of the god (Inti), one of the most venerated deities in Inca Religion. It was the celebration of the winter solstice and became an important festivity to the religious, ceremonial, social and political ambience that extended through the entire Tahuantisuyo (Inca Empire). After the Spanish conquest, the catholic church banned the Inti Raymi celebrations in the 1570s, pushing them underground and almost into obscurity. 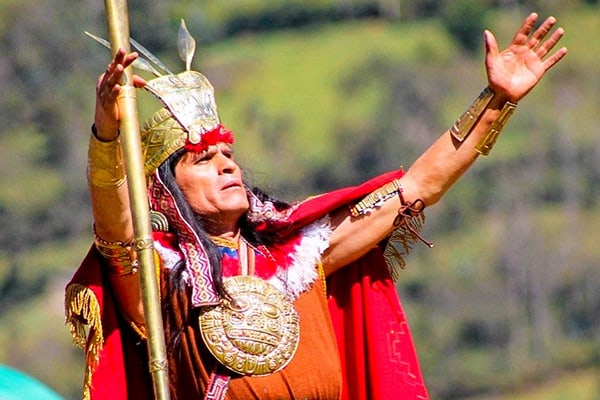 The Inti Raymi Festival has been revived, and is among the most spectacular attractions of Peru. Every June, the city of Cusco prepares for the festival over nine days. The first several days are more about partying and celebration than ancient tradition, but the 24th June is when the real festival of Inti Raymi takes place. The downtown of Cusco is closed to traffic as actors, dancers, singers and other performers gather from all four suyu or “provinces” of the former Inca Empire.

At Sacsayhuamán, on June 24 of each year, Inti Raymi is reborn!

The Ceremony of Inti Raymi

Finally, after a few more rituals, a llama sacrifice is staged (no killing takes place) to appease the sun and ensure that the days begin to get longer again. Dances and performances are held, once again representing the native traditions and culture of the four regions of the ancient empire and its diverse people. Then the party winds down and everyone heads back to the center of Cusco for various after-parties and festivities.

Inti Raymi history dates back to the start of Tawantinsuyu, the Quechua term for the Inca Empire. Inti Raymi was the most important Incan festival as it was their New Year celebration. The festival celebrated the return of the sun (Inti) during the winter solstice, and the connection of the Sapa Inca with his people. In the old days, the festival involved many human and animal sacrifices, but the modern revival emphasizes symbolic offerings of figurines and effigies. These offerings were to please the Inti at his farthest point from Earth, and convince him to return to give life to the land. 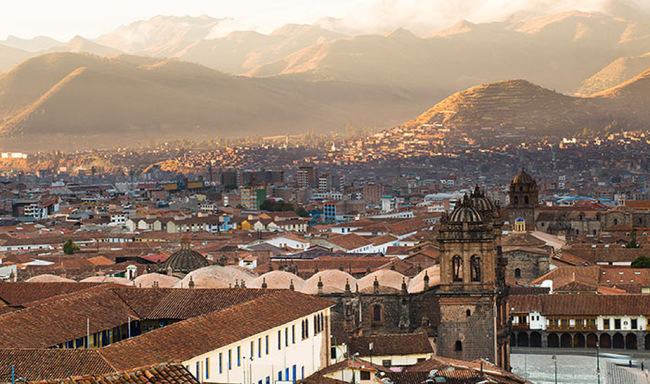 The first three days of the festival began with a massive procession from the Inca Temple of the Sun, Coricancha (now the Catholic Convent of Santo Domingo), through the city of Cusco, the Inca Capital to the fortress of Sacsayhuaman. Workers would run ahead of the procession, sweeping the road and covering it with flowers so it would be clean and soft for the feet of the Sapa Inca’s entourage. At that time, there was a massive golden tower at Sacsayhuaman that the Inca would climb to address the people of the empire. The priests of Inti would bless the people, and the procession would return to Cusco. 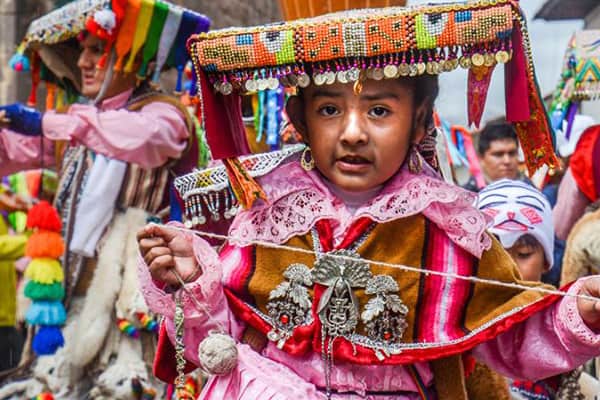 On the fourth day, the middle of the festival, as many as two hundred Llamas and Alpacas were sacrificed. In times of trouble, such as earthquakes or plague, two children from each of the four regions of the empire were sacrificed as well. The entrails of the black llamas would be examined by priests for omens of the upcoming year. Two large, fine golden goblets of the best chicha would be poured. One would be given to Inti, and poured into a jar that sat in the temple, and the other would be first sipped by the Sapa Inca who then passed it around among the nobility to solidify the bond of loyalty between ruler and subject.

The Inti Raymi was established by Pachacuti Inca Yupanqui, the ninth Sapa Inca and one of the greatest conquerors in the empire. Pachacuti took the small kingdom centered on Cusco and built it into a massive empire that stretched across the Andes. In 1412, to celebrate his accomplishments and solidify his position as the son of Inti, he threw the first Inti Raymi celebration alongside his wife, who symbolized the legendary Mama Ocllo.

The last official Inti Raymi of Tawantinsuyu was held by the doomed Inca Atahualpa in 1535, the year before the Spanish conquest. The Catholic church, with the support of the Spanish Empire, banned the festival, though it continued undercover and in remote areas where the Spanish and the Church held little power. In areas where the church was more powerful, the Festival of the Sun was merged with the feast day of St. John the Baptist, and celebrated in a guise that was acceptable to the priests and conquistadors.

The holiday was revived in 1944 by Faustino Espinoza Navarro, a Quechua writer, actor and director, who revived the celebration in Cusco as part of an effort to restore the pride and identity of the Quechua people. Navarro himself portrayed the Sapa Inca for twelve years, before handing off the role to a successor handpicked for eloquence, dignity and grace. Today the yearly celebration, performed in Quechua, draws thousands of tourists from all over the world, and is South America’s second largest festival after Carnaval in Rio de Janeiro. Smaller celebrations are held throughout the Andes, and anywhere the Quechua people have spread, including far off cities such as San Francisco and Madrid.

After the unforgettable Inti Raymi experience here in the ancient capital many travellers choose to stay in the city and explore Cusco (check out our complete Cusco city guide!) or fly straight back to Lima or their home country, but southern Peru still has so much more for you to experience.

Peru Hop offers overnight buses down to Puno and Lake Titicaca, another sacred ceremonial site for the Inca empire, famed for floating reed villages of the Uros people and being the highest navigable lakes on the planet. Our trips to Puno and Lake Titicaca include many of the nearby attractions as part of the package, as well as homestays with the Uros and Taquileño locals in their floating village.