Discover the Huaca Pucllana pyramid. This is a magnificent pre-Inca structure is located right in the city, and an easy visit from Miraflores.

Lima, Peru is home to many wonders of the world including the Huaca Pucllana pyramid. Huaca Pucllana served as an administrative and ceremonial center in the pre-Inca Lima culture to elite clergymen. Today, Huaca Pucllana now offers its visitors a glimpse into the history of the ancient culture.

The Huaca Pucllana is an adobe and clay pyramid located in the Miraflores district in centralized Lima, Peru. The pyramid has seven staggered levels. The inhabitants of the area who built the pyramid lived 200 AD to 700 AD. Huaca Pucllana itself, however, was built around 500 AD. The process of uncovering Huaca Pucllana began in 1981 and in 1991 it became a historical and cultural park.

Quick Tip: If you’re traveling from Lima airport, use the luxury Airport Express Lima, to enjoy reclining seats, USB ports for charging your phone, free wifi, and hotel drop off.

The pyramid once served as an important ceremonial and administrative center for the Lima Culture in the region. There is a plaza that surrounds the structure and a large wall dividing it into separate sections. A section of the plaza has benches and deep pits. Inside of this section is where they would perform ceremonies as well as make their sacrifices and offerings.

Another area of the plaza had an administrative section. Various small clay and adobe huts were once located inside the enclosure. You can find the intact remains of the “Señor de los Unkus” (The Lord of the Unkus). His remains were uncovered and are located in one of the tombs on the site.

Taking a trip to visit Lima, Peru can be one of the best trips that you can take. Lima has a lot of culture, history and natural beauty and serves as the capital of Peru. Many people are surprised by the number of activities and tours that are available to places like Huaca Pucllana. 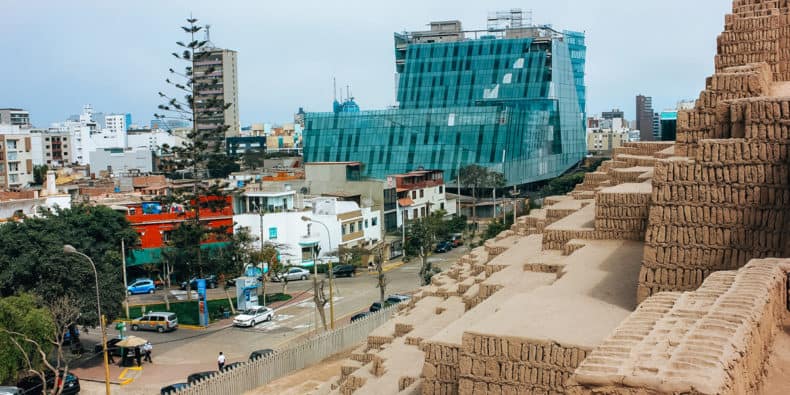 Taking tours while visiting in Peru is a popular thing to do among visitors wanting to see and experience the culture. Most often those who take a tour of Huaca Pucllana really enjoy it and highly recommend it as a cool site to see. Getting to the pyramid is fairly simple and is located in the center of the Miraflores district in centralized Lima, Peru.

Taking a Tour of Huaca Pucllana

You can gain entry to Huaca Pucllana for a pretty low price, and a guided tour is included as well once you arrive there. You can explore the tiered pyramid and large walled rooms built with centuries-old bricks. Bricks used for the construction have unfortunately begun to decay. There are workers there to restore and replace damaged bricks. Fortunately it seldom rains in Peru, otherwise, the mud pyramid might have fallen years ago.

Among the many things that your attention will be directed to by your tour guide is the uncovered tombs. The process of unearthing the secrets of Huaca Pucllana is still taking place by archeologists and workers. There have been both human remains as well as offerings unearthed at the site and inside the tombs. The recent discovery of four mummies helps to shed more light on the Wari culture, which existed around 700 AD. The mummies found include an elite woman and three children sacrificed to accompany her into the afterlife.

Standing at the uppermost section of the pyramid gives you a great overview of the ruins although not so much of the city. The tour will go over the process of making the bricks used to build the pyramid. You can also see what early humans in the region looked like at those times from constructed statues.

Getting To Huaca Pucllana

When in Lima, Peru, there are a number of ways for visitors to get around the city and to the pyramid.

If you are up for some exercise you can always walk there depending on how far your accommodation is. When visiting Peru, you can expect to do a decent amount of walking. However, Huaca Pucllana is only a 20 minute walk from Kennedy Park, so you can easily enjoy a stroll there.

If walking isn’t your cup of tea and you are decent at haggling then you can always opt to take a cab. Keep in mind that the cabs don’t have meters so you will want to agree on the fare with the driver prior to taking the ride. 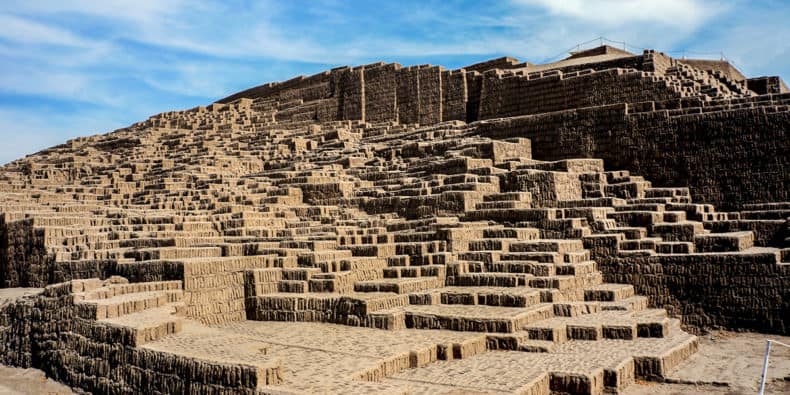 There is another option for getting around Lima to Huaca Pucllana and that is by using the Peruvian bus system. Although this an inexpensive option, unless you speak and understand Spanish, and know in advance where to go this may not be the best option. We would recommend a bus the Kennedy Park, and from there stretching your legs and walking there.

Within the ruins of Huaca Pucllana, there is a restaurant. This restaurant overlooks the ruins which are lit up at night. Offering high quality Peruvian dishes, from the cost to the jungle, you can enjoy your food in an unforgettable and unique location. It’s doors are open for service daily between 12pm and 4pm, and then from 7pm until midnight. This restaurant offers Peruvian food at a world class standard of fine dining, and is a must visit while you stay in Peru. 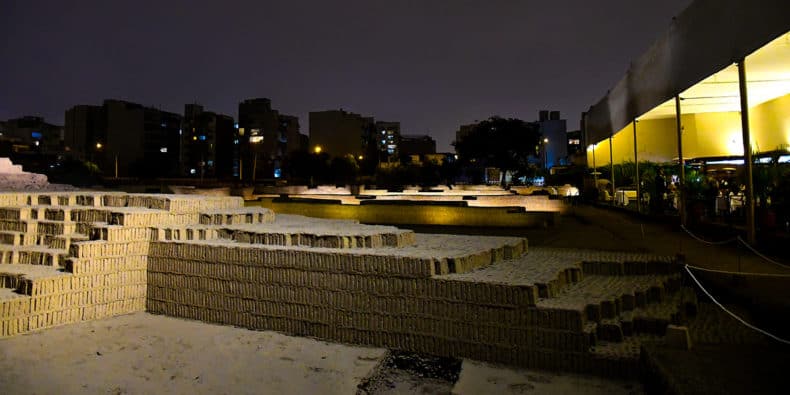 Other Attractions Near Huaca Pucllana

The Huaca Pucllana is an amazing site, however, Lima, Peru also has plenty of other noteworthy attractions.

To get an overview of everything there is to see in Lima, you can take a free walking tour. In the morning you can explore the historical center, and in the afternoon, Miraflores. These tours are easy, fun, and best of all, free.

The Larco Museum is truly a Peruvian museum worth seeing. The museum is housed in a former mansion and holds a variety of items in its collections. From 3,000-year-old ceramics to various types of mummies of the cultural periods, the Larco Museum has lots of historically important artifacts.

The Aliaga House is the oldest house in all of the Americas. Built in the 1500s the house has stayed in the Aliaga family and has been continuously renovated over the centuries. The plot adjacent to the Government Palace was given to a trusted friend, Jerónimo de Aliaga from the conquistador Francisco Pizarro who founded Lima. The house has a wide range of Peruvian artifacts and artwork. Tours are available but must be booked in advance.

Exploring Lima, Peru is like taking an exciting journey through history. With cultural and historical sites like Huaca Pucllana, Lima is a city that continues to offer its visitors new discoveries. From catacombs and tombs to mummies and pyramids, the lost cultures and civilizations of Peru have left their mark on humanity forever. Taking a trip to Lima, Peru is certain to leave you wanting to experience even more.

If we are outside operating hours, we will call you as soon as we open again
Important: Our team will contact you via phone .
Note that phones operate from 9am to 7pm Peruvian time (Peruvian time now is: 02:49 pm)