The Morro Solar offers some breathtaking views of the sea and the city while also being of high historical importance.

One of the most popular places to visit in Lima

You can find the Morro Solar in Lima, Peru, a little south of Miraflores and Barranco. With some breathtaking views of the sea and the city, and an astronomical observatory, this hill is visited by many visitors – Peruvian and international – for its monuments and history, most importantly because of its role in the War of the Pacific.

The War of the Pacific (aka The ‘Birdpoop’ War)

Many wars have been fought for ‘shitty’ reasons, but the War of the Pacific was definitely the biggest war ever about bird shit. The coasts and islands of Peru, Chile and Bolivia (back when it still had a part of the Pacific coast) used to be loaded with guano, super-fertilizer bird excrements. In the 19th century, this guano became an enormously important natural resource, since the industrial revolution and growing cities made an agrarian revolution necessary. In Peru, the exportation of bird poo was good for 80 percent of the state income. 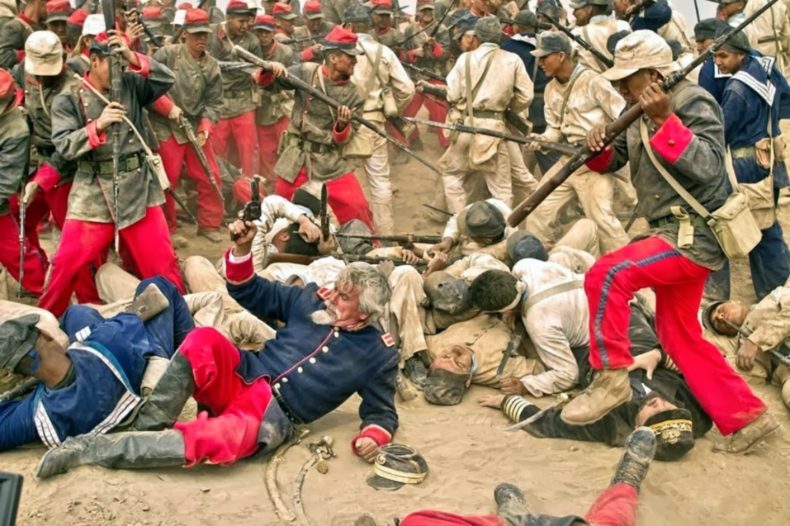 In 1879, Bolivia and Chile began to fight about this. Chilean companies were harvesting the guano and nitrate (used as a fertilizer, but also to make gunpowder) on the Bolivian coast. Bolivia wanted a larger share of this very lucrative business and raised the taxes on the Chilean companies. The two countries couldn’t reach an agreement and some also accused Chile of being expansionistic, so they went to war. When Chile invaded Bolivia, Peru intervened, since it had signed a secret treaty of defense with Bolivia only a couple of years before. Peruvian diplomacy failed to solve the issues and Bolivia lost some of its land to Chile quite rapidly.

Chile didn’t stop there and invaded Peru too. After the maritime battles in the Pacific and the conquest of the south of Peru, the Chileans arrived in Lima in January 1881. The Peruvian army had set up two lines of defense; the inner defense which was close to Miraflores and the center of Lima, and the outer defense which was through the districts of Chorrillos and San Juan de Miraflores. They had set up a defense of 20,000 men and women, barely trained and with outdated arms and armor. On January 13th, during what would be called the Battle of San Juan, the Chileans quickly broke through the outer line of defense. By the afternoon only the division of general Miguel Iglesias was still standing. After a long and bloody battle they were also defeated by the much stronger Chilean army. By the evening the Chileans were celebrating their victory in Chorrillos, robbing the neighborhood, killing civilians and getting completely drunk. (And many international visitors uphold part of this tradition by trying lots of Piscos and spending nights in local bars!!). The next day the Chilean soldiers were too drunk to attack the inner line of defense, so their commanders decided to hold a day of negotiations with the Peruvian officials to win some time. On January 15th, in the Battle of Miraflores, Chile finally defeated the Peruvian forces and occupied most of Lima. The remaining Peruvian fighters waged a guerrilla war that did not change the war’s outcome. After some threats of international intervention and in a deal mediated by the U.S. Chile and Peru signed the Treaty of Ancon on October 20, 1883. Bolivia signed a truce with Chile in 1884. 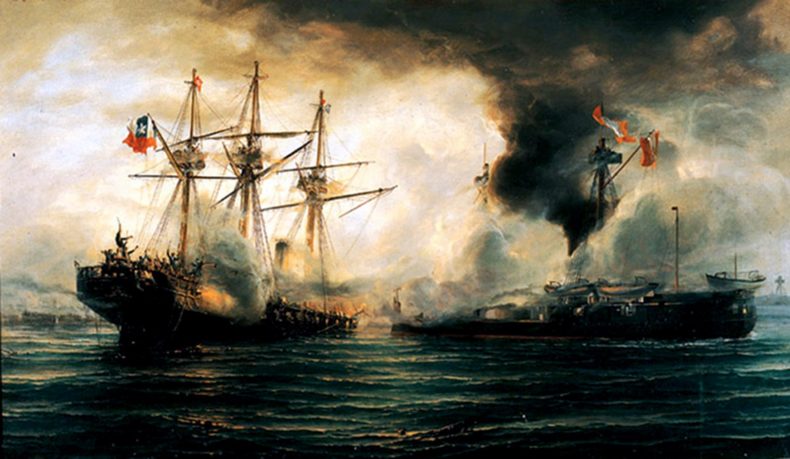 Chile acquired the Peruvian territory of Tarapacá, the disputed Bolivian department of Litoral (cutting Bolivia off from the sea), as well as temporary control over the Peruvian provinces of Tacna and Arica. In 1904, Chile and Bolivia signed the “Treaty of Peace and Friendship” establishing definite boundaries. The 1929 Tacna–Arica compromise gave Arica to Chile and Tacna to Peru.

To remember the Peruvian soldiers who died for their country, there is now a monument for all the ‘unknown soldiers’ on top of the Morro Solar. In front of it, there’s a statue of the national hero Miguel Iglesias who defended this hill during the Pacific War.

The Christ of the Pacific: “As big as the ego of a former president”

In 2011, former president Alan Garcia decided to give a gift to the people of Peru, to thank them at the end of his term. He had a 37 meters/ 120 foot statue built by a Brazilian company to resemble the Christ statue of Rio de Janeiro. He said “I want it to be a figure that blesses Peru and protects Lima.” 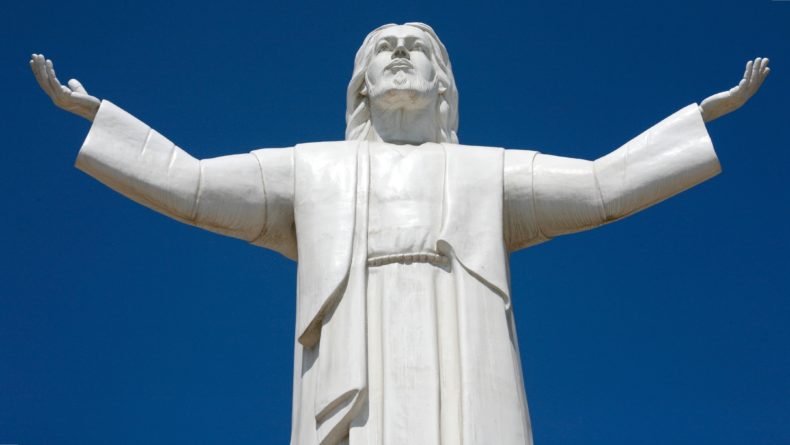 But not all Peruvians were very thankful for this gift. First of all, the mayor of Lima didn’t agree with the location of the statue, since it was built on a historical battlefield. Others questioned the financing of this statue. According to Garcia the statue was paid for with his own money or through private and corporate donations, but since the company that built the statue also had contracts with the Peruvian government, many Peruvians doubted this. Also the use of a religious symbol (instead of a political or cultural one) caused some opposition. A Peruvian newspaper described it to be “as big as the ego of Alan Garcia”. In spite of the controversy and even numerous Facebook groups with thousands of members criticizing the project, the Christ of the Pacific now watches over Lima, surrounded by people taking selfies with it, pretending they’re in Rio.

On the other side of the Morro Solar there is a place of pilgrimage dedicated to the Virgin Mary. On several catholic holidays, a long procession walks up the hill, passing by several little shrines and chapels, carrying up a Virgin statue. From the chapel on top of the Morro Solar, you can see the local artisanal fish market and some private beaches of an expensive private club. There are also statues of the Peruvian Saints: Santa Rosa de Lima, a local lady with roses in her hair, and San Martin de Porres, a saint from mixed African-Peruvian descent, who is still the most popular saint in Peru. 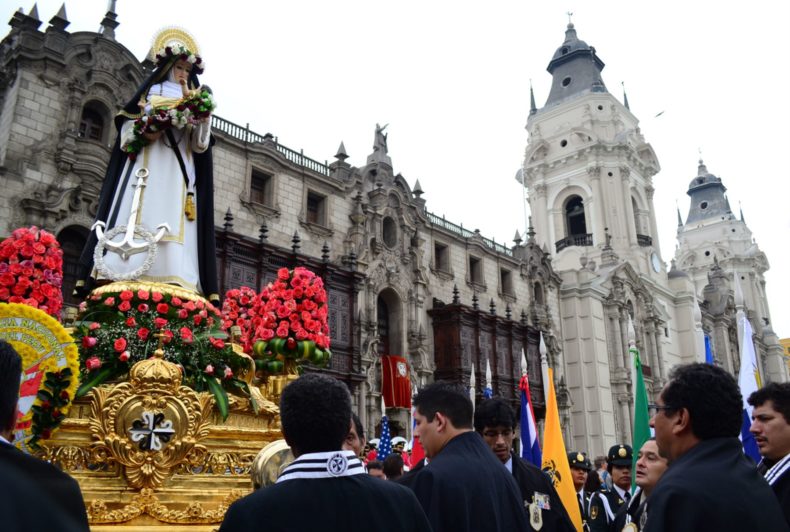 Next to the place of pilgrimage, there’s a large illuminated cross, that brightly shines over the sea, and can be seen all the way from Barranco or Miraflores at night. It was erected for Pope John Paul II, when he was visiting Peru several decades ago. This was during the time of terrorism, when a terrorist group had recently bombed nearby antennas. The left over scrap metal was used to build the cross, possibly for economical, ecological or symbolical reasons.

Thanks to Carolien Bogaerts for sharing this blog post with us.

BOOK A TOUR IN LIMA NOW

To book a tour in Lima we recommend you use FindLocalTrips.com a search and comparison website for tours across South America.

If we are outside operating hours, we will call you as soon as we open again
Important: Our team will contact you via phone .
Note that phones operate from 9am to 7pm Peruvian time (Peruvian time now is: 9:31 am)