Traditional Peruvian Desserts To Die For

Have an insatiable sweet tooth that you can’t wait to satisfy while traveling? Check out these traditional Peruvian desserts to die for!

Anyone who has an insatiable sugar craving will agree that sampling a country’s sweets is one of the best parts of traveling. That’s why Peru is one of my favorite places on Earth. Its combination of Spanish and native culinary influences make for an especially interesting repertoire of desserts. (If you want to check out some of the traditional savoury Peruvian foods, click here!) Here are a few of our favorites:

Due to the city’s long, dreary winters, citizens of Lima have developed a number warm desserts over the years to help themselves stay warm. Mazamorra morada is one such dessert, eaten year-round but most often during the winter and spring months. This dessert has a complex set of flavors, utilizing purple corn, cinnamon and clove with a variety of fruits such as pineapple, cherry, peach and apricot.

The mixture is thickened using sweet potato flour to make a rich, gelatin-like treat that is often served side-by-side with arroz con leche (a dessert consisting of sweetened milk with rice). 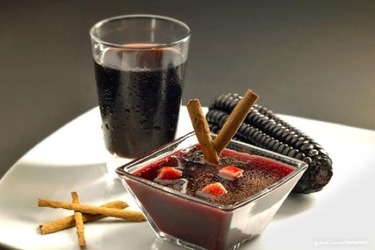 This classic dessert was invented by Amparo Ayarza, the wife of poet Jose Galvez, who named it suspiro de limeña (which means “sigh of a woman from Lima”) because of its light and sweet nature. The recipe consists of manjar blanco(the Peruvian name for dulce de leche, a type of sweetened milk paste) with port wine merengue and cinnamon. This dessert is most popular in the Lima region. 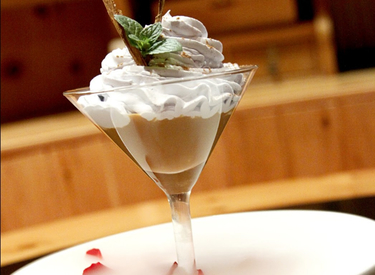 Picarones, a type of fritter or donut, first appeared in Peruvian cookbooks in the mid-19th century. They differ from other donuts in that they are made using sweet potato and squash. Once fried, they are topped with chancaca, a syrup consisting of raw unrefined sugar from sugarcane and usually flavored with orange peel and cinnamon. These flavorful rings are often served as a dessert accompanying anticuchos (skewered cow heart) and other creole food. 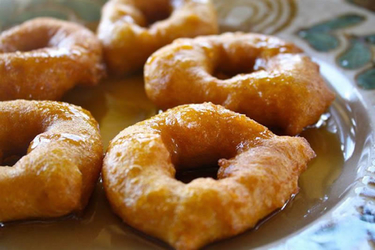 This popular variation of arroz con leche gets its dark brown color from the sugarcane syrup called chancaca. The recipe, which likely dates back to early colonial times in Peru, also commonly includes pecans and raisins 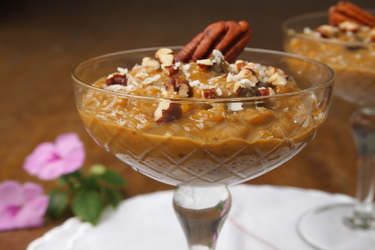 Many of the desserts which have become commonplace in Peru were perfected by nuns in the Spanish convents located throughout the country. Guargüeros are an example of these ¨de convento¨ sweets of the colonial era. This treat is most common in cities like Arequipa, Cusco, and Tacna in southern Peru, but can be found all across the country. 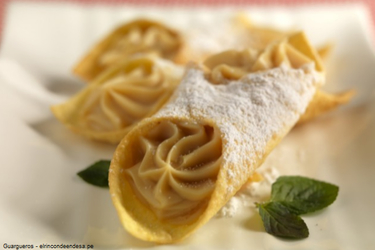 The month of October is called El Mes Morada (“The Purple Month”) in Lima. During this month, thousands of faithful wear purple robes and march in processions to celebrate El Señor de Los Milagros (“The Lord of Miracles”), an image of Jesus Christ in a chapel in central Lima which has been credited with many miracles–including one for an Afro-Peruvian woman named Josefa Maraminillo.

This woman, who was also known as Doña Pepa, was suffering from a mysterious illness which caused paralysis in her arms, and she visited El Señor de Los Milagros to seek help. After she was miraculously healed, she created this turrón and began to hand it out to other devotees at the chapel as a way of showing gratitude. The recipe (supposedly given to her by saints in a dream) calls for multiple layers of anise-flavored cake held together with fruit syrup and topped with colorful candies. 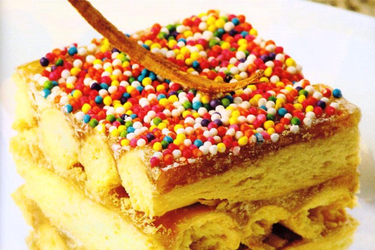 The lúcuma, which is called “eggfruit” in English, is a subtropical fruit that grows in the valleys of the Andes. Its flavor is similar to that of a sweet potato, and it is very popular as a flavoring for ice cream and other desserts in Peru. 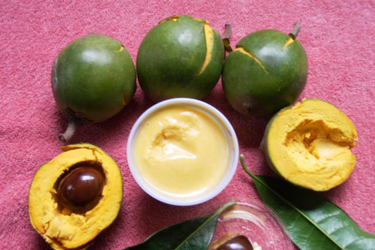 There are several theories about the origin of this rich dessert consisting of dried bread, chancaca, cheese, fruit and nuts. Some believe that it originated with the Incas, who added sugar to a traditional dish after sugarcane was brought by the Spanish. Others believe that it comes from black slaves, who used the leftovers of their masters to create it.

Another theory holds that it comes from the War of the Pacific against Chile, when it was given as a ration to soldiers. Regardless of the exact origin of ranfañote, the one thing that’s clear is that it’s a recipe that’s been a part of the repertoire of Peruvian desserts for a long time, and remains a favorite to this day. 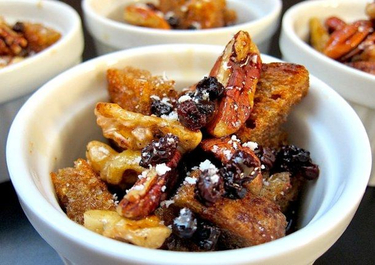 This fruity dessert, whose name comes from the Quechua chapusca meaning “mixture,” is a favorite of Peru, Ecuador, and Colombia. It is a thick sauce with many local variations, but usually containing soursop, pineapple, quince, apple and mote. Champús is served hot, making it a great dessert for winter months. It was originally created during the colonial era, but its popularity continued into the republican era when it was often sold by street vendors in Lima and other cities. 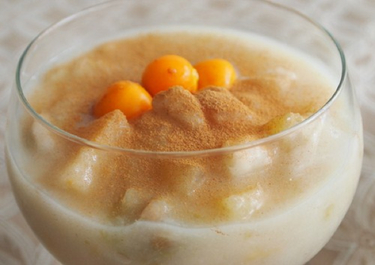 This sweetened black bean dessert is thought to have originated among communities of Afro-Peruvians in southern cities like Chincha and Cañete. Cooked black beans are mixed with sugar, milk, and chancaca to form a smooth purée which is then topped with roasted sesame or ground cinnamon. This dish is often eaten during Holy Week. 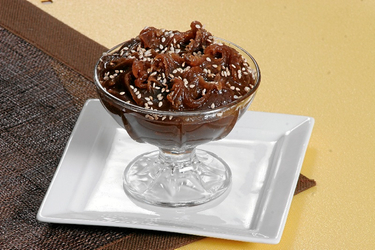