I had not planned to trek Colca Canyon but everybody was talking about it when I got to Arequipa. My guide on the Peru Hop bus was really urging me to go so I decided to look into it. I did a bit of research on the different prices of tours and treks and decided this is a must-do and I booked the two day / one night trek as I wanted to make sure I was doing it right. I had heard this hike was quite strenuous and I am most certainly not an experienced hiker but I would consider myself quite fit. All set to go, I powered through the 3 AM start time and set out to explore the second deepest canyon in the world. 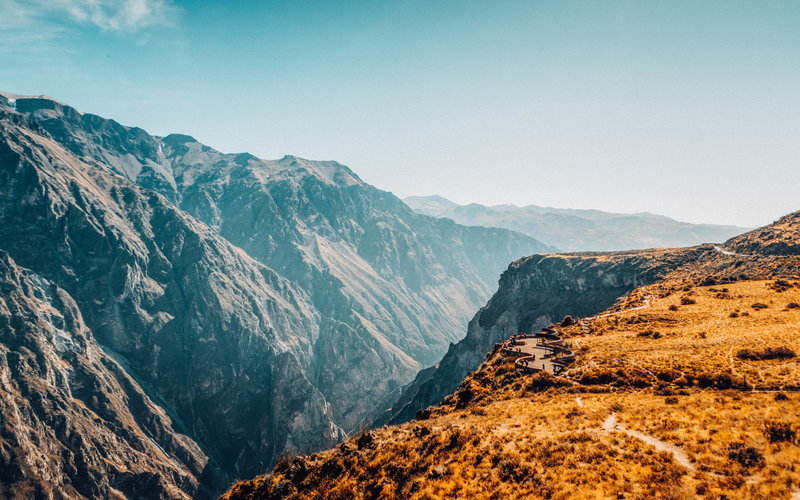 It takes about 3 hours to Chivay where we stopped for breakfast. The typical South American breakfast of bread jam and butter will not keep the energy levels up all day so make sure you pack a lot of snacks. We then went to the famous viewpoint La Cruz del Condor to view the Andean Condors, a sacred animal in Peru. I caught a great glimpse of this giant yet graceful bird but unfortunately, it was difficult to get a good photograph as the tourists were out in force on this gorgeous sunny day.

I found my guide and met the group I was trekking with. Everyone was in great spirits and raring to go. Our guide started by introducing Colca Canyon and shared some short Peruvian legends. The name ‘Colca Canyon’ comes from the small niches (Colca) in the rock cliffs. In the ancient times, these niches were used for storing crops, as well as tombs for the high society.

Finally, we got going and I was feeling as energetic as ever. The first two hours were thoroughly enjoyable. Two picturesque colossal mountains slope downwards to meet at the carving Colca River. Walking down the dusty path it seems the as if Colca Canyon is untouched by humans because of its vast natural beauty. After 2 hours there was sweat on my forehead and I was not the only one. I still felt full of energy but suddenly it dawned on me, we had only walked downhill.

The second half of the day involved exploring the depths of the canyon. We trekked up to some viewpoint and along the river. Our guide was really great and kept everything interesting. He even told us all about the plants in Colca Canyon and which plants heal cuts and diseases, which ones repel mosquitos, he even excreted some red ink from one plant and made a few of our group look like ancient Incan warriors!

We stayed in a village called Sangalle on the first night. It was a truly stunning town in the middle of the canyon. They even had a swimming pool surrounded by trees and old-fashioned huts. I managed to get a quick swim in after the long day of hiking. After getting some much-needed food, I didn’t last long during happy hour and headed to bed for an early sleep to prepare for another early start.

I was feeling pretty tired at 4:30 AM the next morning getting ready for my final day of Colca Canyon. Although I was feeling better than some others in my group, they looked like they really enjoyed the happy hour! The sun was nowhere to be seen as we ascended into the darkness. The walk was uphill and tough, I was really beginning to feel the altitude. Luckily I had snacks which kept me going until breakfast.

The sun began to rise at around 6 AM and I suddenly forgot how tired I was. I forgot about the pain in my legs and my lack of sleep because I was seeing the sun rise over Colca Canyon. We all took a break at the top of our first tough climb of the morning to take in this incredible sunrise. Without a doubt one of the most beautiful scenes I have ever seen in my life. It was as if we were the only people in the whole canyon and this colossal landscape was just waking up to show everyone its beauty. I suddenly understood why we had to get up so early!

The sunrise lifted everybody’s spirits, but the altitude was getting to some people. Luckily I had spent time at altitude and had some cocoa leaves so I was fine. We reached the top of the canyon and the sun was now fully beaming. I went from wearing two jackets to being in just a t-shirt. We then stopped in the town of Cabanaconde for a lovely and well-deserved breakfast. And just like that my Colca Canyon journey was coming to an end.

A bus then picked us up from here. On the way back to Arequipa, we stopped off at a natural hot spring, got some great photos at some spectacular viewpoints and of course met some llamas and alpacas!

While the trekking Colca Canyon involves some early rises, I can assure you it is worth it! I really enjoyed the group aspect of the trip. The walking is very enjoyable and it was also great having a guide. My trip to the second deepest canyon in the world surpassed all expectations and I was glad I took the leap and went alone. It is also a great way to adjust to altitude if your next stop is Machu Picchu! Trust me and don’t waste an opportunity to explore one of the deepest canyons in the world!

A guest post by Mark Collins on his around-the-world backpacking trip.

If we are outside operating hours, we will call you as soon as we open again
Important: Our team will contact you via phone .
Note that phones operate from 9am to 7pm Peruvian time (Peruvian time now is: 02:14 pm)