The Pre-Incan Ruins in Lima

As the site of numerous pre-Incan cultures, Peru is well-known for its large number of archaeological ruins. Included are such diverse sites as the world-famous Inca citadel of Machu Picchu, the mysterious Nazca lines of the southern desert, and the large adobe city of Chan Chan in the north. One thing that many people don’t realize, however, is that there are fascinating ruins to visit right within the capital region. If you’re in Lima, you’re only a short bus or taxi ride away from the following pre-Columbian ruins:

Named for the creator god (pacha kamaq means “earth-maker” in Quechua), Pachacamac was once an important place of worship for the region’s inhabitants. Originally settled around 200 AD, the site passed through the hands of the Huari and Lima cultures (most of its buildings were constructed by the latter) before being conquered by the Inca empire around the year 1470. The Incas regarded Pachacamac as a place of special religious significance and adopted the local god into their own pantheon.

Pachacamac is located about 25km from the central city of Lima, so the best way to visit is to take a tour, which is available from most agencies in the city. It’s also possible to take a bus to the site, for those who are familiar with Lima’s public transit system.

Located in the stylish, upscale district of Miraflores, the clay and adobe pyramid of Huaca Pucllana presents an interesting contrast to the sleek, modern buildings which surround it. This site served as an important ceremonial center for the Lima culture, who lived in Peru’s coastal region between the years 200 and 700 AD. Tours are available until 10pm in both English and Spanish. At the foot of the pyramid there is also a restaurant where visitors can eat traditional Peruvian food while enjoying an excellent view of the site. Huaca Pucllana (address: cuadra S/n, Calle General Borgoño 8) is very well-known so it should be quite easy to take a taxi there from elsewhere in Miraflores or neighboring districts. 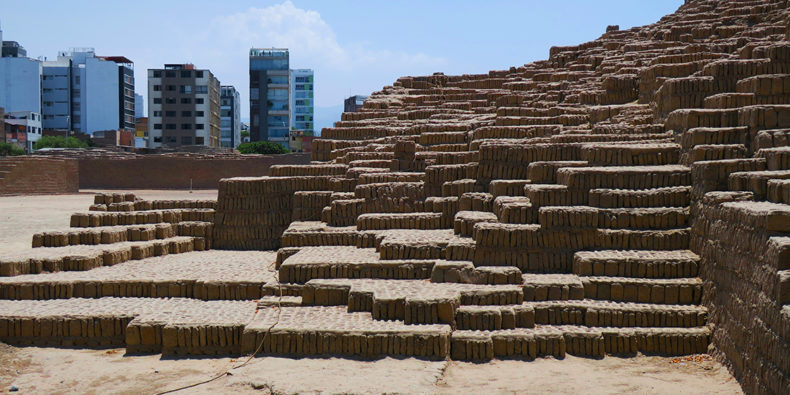 Like Huaca Pucllana, the pyramid of Huaca Huallamarca is located in a heavily urbanized district of Lima, which creates and interesting and surreal contrast with the surrounding environment. This site was originally built by the Lima culture who used it as a temple and later as a burial grounds. After the conquest of the region by the Inca empire, the site was used mainly as a human settlement, with settlers adding terraces to the side of the pyramid and installing dwellings, patios, storage, and cooking areas. Huaca Huallamarca is located at Av. Nicolás Rivera 201 in the San Isidro district of Lima. Tours are available until 5pm in both English and Spanish. 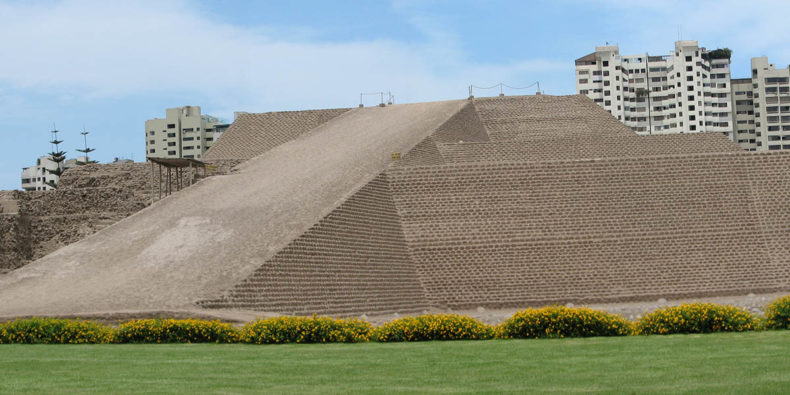 All three locations listed above are excellent places to take a day-trip while in Lima, and will give you a great chance to familiarize yourself with some of the ancient cultures of the region. To continue your trip into other parts of Peru, including the world-famous Inca ruins of Machu Picchu, the best way to travel is with Peru Hop. This service allows travelers to set their own flexible itinerary and see all of the country’s most important attractions. I hope you’ll get the chance to see everything that this wonderful country has to offer!